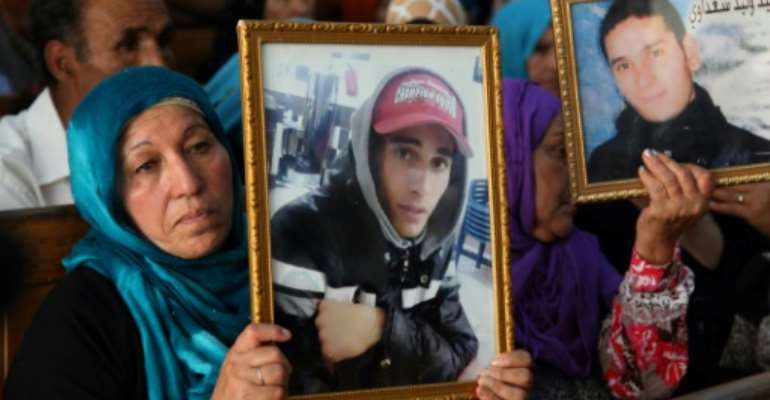 Families of victims of Tunisia's 2011 revolt against dictatorship carry portraits of their loved ones during a trial in Kasserine on July 13, 2018. By HATEM SALHI (AFP/File)

The commission tasked with healing the wounds of dictatorship in Tunisia has dug up accusations both against incumbent President Beji Caid Essebsi and figures active in today's post-revolutionary media landscape.

Set up three years after the 2011 uprising that ousted dictator Zine El Abidine Ben Ali, the Truth and Dignity Commission (IVD) was created to probe human rights violations and make recommendations for Tunisia on its path to democracy.

The IVD's final report, which runs into thousands of pages and was published last Friday, calls for reforms "to dismantle a system of corruption, repression and dictatorship" within state institutions.

The panel calls for Essebsi, as "a symbol of the state", to make an official apology to all the victims of human rights violations at the hands of the state since 1955, a year before independence from France.

Its report is based on tens of thousands of interviews carried out since the panel was set up five years ago.

Ben Ali, who fled to Saudi Arabia in 2011 and has since lived in exile, is on trial over several cases of the torture to death of political opponents, in cases built on evidence gathered by the IVD.

The commission accuses Essebsi, who is now aged 92, of complicity in torture for his role in the 1960s as national security chief and later interior minister under Tunisia's first president, Habib Bourguiba.

"Investigations by the commission have proved that torture was systematic and planned by senior officials in security affairs who ordered, incited, accepted and kept silent on the torture of victims in the course of their duties," the report says.

The IVD says that interior ministers under Bourguiba, including Essebsi, were "aware their leaders had committed serious violations".

The testimony of former political prisoner Moncef Materi, who was detained during the 1960s, points directly to Essebsi.

Materi told the commission of how he was brutally punished after having complained to Essebsi of his conditions of detention during a visit to the prison by the then security chief.

"You're still stubborn! We'll see," Essebsi is quoted as having told the prisoner who asked why he was being kept tied up and refused visits by family members.

Essebsi, who has tense relations with IVD head Sihem Ben Sedrine, is a potential candidate for re-election in November polls.

In the runup to both legislative and presidential elections, the commission identifies several media figures and journalists who were paid large sums for their support of Ben Ali's propaganda machine and who remain active today.

The commission condemns what it calls "the absence of political will, a clear vision on the role of the media in the period of democratic transition".