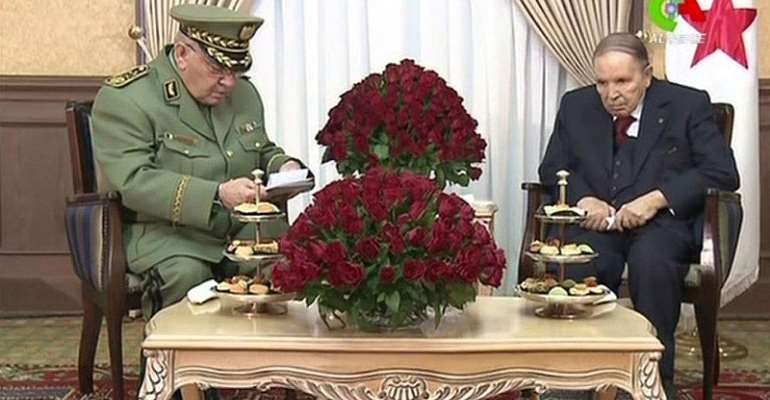 The coalition ally of Algeria's ruling party has called on President Abdelaziz Bouteflika to resign, piling pressure on the ailing leader after the army chief demanded he be declared unfit on Tuesday, in a bid to defuse mass protests.

This comes as Algerians await a decision from the country's constitutional council on whether Bouteflika is indeed unable to carry out his presidential duties.

In a statement signed by the leader of the National Rally for Democracy, recently sacked prime minister Ahmed Ouyahia said the party "recommends the resignation of the president... with the aim of smoothing the period of transition."

Algeria has seen weeks of mass protests demanding Bouteflika step down since he announced he was standing for a fifth term of office with the support of both his National Liberation Front and the RND.

Ouyahia is a longtime supporter of Bouteflika and served as his prime minister three times since 2003 before being sacrificed on March 11th in a bid to calm intensifying street protests.

82-year-old Bouteflika has been in power since 1999, but was weakened by a stroke in 2013 which affected his mobility and speech. He has spent prolonged periods receiving treatment in hospitals in Europe and day-to-day affairs have been left largely to power brokers within his entourage.

The prospect of another five years of being ruled by a powerless president sparked mass protests on February 22nd that have escalated with each successive week.

The president's announcement on March 11th that he was withdrawing his candidacy and would rule on an interim basis only while fresh elections were organised under a new constitution failed to calm public anger.

On Tuesday, armed forces chief of staff General Ahmed Gaid Salah, who was appointed by Bouteflika in 2004, said the president should either resign or be declared medically unfit to govern by parliament using its constitutional powers.

Addressing officers in a broadcast, Salah said the solution to the biggest

political crisis since the army cancelled elections in 1992 would be the exit of the president on health grounds.

For years, rumours have circulated about potential successors to Bouteflika, but no single credible candidate has emerged with the backing of the military, the political and security establishment who is not at least 70.

The next formal step is for the constitutional council to formally rule on Bouteflika's fitness for office. The body has not said when it might reach its decision. Any ruling that he is not fit to govern would have to be ratified by members of parliament's lower and upper house by a two-thirds majority.

Based on Article 102 of the constitution, the chairman of parliament's upper house, Abdelkader Bensalah, would serve as caretaker president for at least 45 days in the nation of more than 40 million people.

The last time the army stepped in during a crisis was in 1992, when the generals cancelled an election that Islamists were poised to win.

That move triggered a civil war that killed an estimated 200,000 people.

The military remains highly sensitive to any signs of instability and Salah has warned he will not allow the demonstrations to lead to chaos.