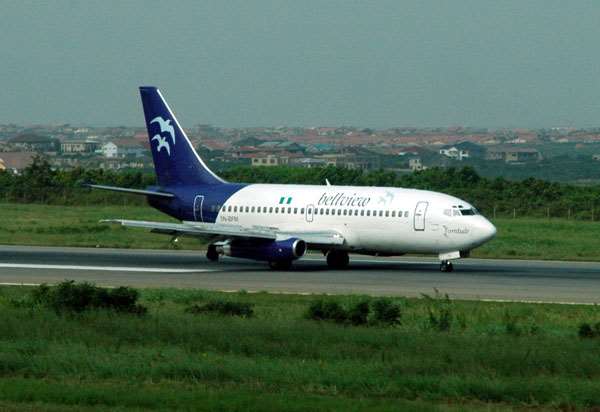 Accra, Dec. 19, GNA - A Boeing 737-200 aircraft operated by Bellview Airlines of Nigeria made an emergency landing at the Kotoka International Airport in Accra on Monday after the pilot reported a hydraulic system failure. Flight B3 252 scheduled for Freetown, Sierra Leone through Accra was expected to touch down at 11.00 hours but landed 55 minutes later with a burst tyre due to system failure. There were no casualties. Mr Femi Awe Gideon, Bellview Country Manager for Ghana, told the Ghana News Agency that the pilot radioed the Accra Traffic Control to report the fault and requested for ground emergency services to enable him to land. Upon landing, the movement of the aircraft was further hampered by a burst tyre so it remained in the middle of the runway, leading to a temporary closure of the airport for 45 minutes during which the passengers were evacuated and the plane towed away.
Meanwhile, the Ghana Civil Aviation Authority has named a team of experts to investigate the incident. In the last two months, three Nigerian operated planes, including a Bellview aircraft crashed in that country, raising concerns of safety among the travelling public, not only those on the domestic route but also passengers flying along the West Coast where many of the airlines operated. According to sources close to the Kotoka International Airport Bellview aircraft was banned from flying following a recent crash of one of such planes in Nigeria about two weeks ago killing more than 100 passengers.