...As Part Of The 62nd Independence Day Celebration
By Moses Jubilant Yabepone Gemeh 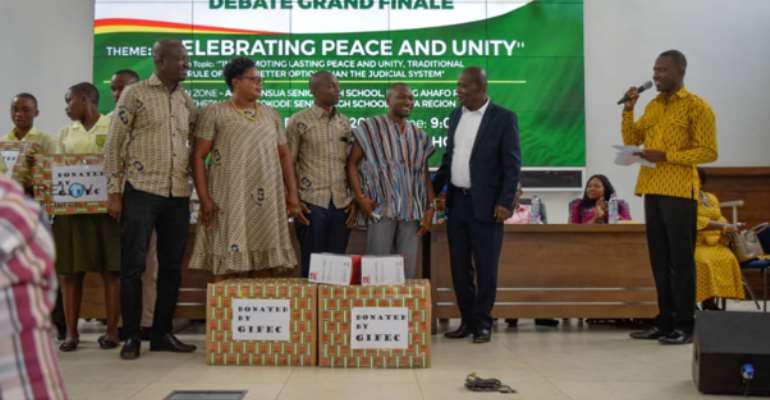 “Debate is a blood sport. It’s combat. But your weapons are words” (Melvin B. Tolson, The Great Debaters.) Words indeed are powerful and when you have the skill to use words to communicate, you will go places. A wise man that I know said, “Being rich is not the problem, but to continue to work so as to always be rich is the problem.” This feat chalked by Sokode Senior High Technical School, located in the Ho Municipality, has not come because of being handpicked.

The 22ND INTER SENIOR HIGH SCHOOL DEBATE GRAND FINALE (2019) started in the first semester of the 2018/2019 academic year with the Inter Schools Debate slated for 27th November 2018 at Sokode SHTS, Ho. The first hurdle was to bypass the inter-schools debate. The schools that contested in the Ho Municipality were E.P.C Mawuko Girl’s SHS, OLA SHS, Mawuli SHS, Tanyigbe SHS, Taviefe SHS, and Sokode SHTS. The debate was on the motion THE DOUBLE TRACK SYSTEM IS A PANACEA TO THE FULL REALIZATION OF THE GOAL FOR THE FREE SHS POLICY IN GHANA. It was just beautiful seeing the various schools advance incontestable reasons for their stance. E.P.C Mawuko SHS debated with Sokode SHTS whilst OLA SHS debated with Mawuli SHS. Taviefe SHS was on standby and later entered the debating arena with Sokode SHTS. After the contest, Sokode SHTS emerged as winners much to the admiration of their peers who congratulated them.

The motion for this contest was TECHNICAL-VOCATIONAL EDUCATION IS THE BEST FORM OF EDUCATION THAT HAS THE TENDENCY TO REDUCE THE UNEMPLOYMENT SITUATION IN GHANA. After this battle on 5th December 2018, at OLA SHS, Ho, where the weapons used to fight are words, Sokode SHTS sidestepped St. Kizito SHS in the finals hence becoming Zone C Champions.

Cranking up for the Regional Debate on 11th December 2018, the debaters from Sokode SHTS knew just one thing. It was now or never. Legs deep in the mud, they rolled up their sleeves and started fervent preparations for the contest. Stalwarts such as Keta SHS, Father Dogli Memorial, and Kpando SHS represented their various zones. Sokode SHTS met KPASSEC while KETASCO met Father Dogli Memorial. The earlier contests at the level and the final dance of the mooses in the debate arena was between Sokode SHTS and KETASCO on the motion STUDENT’S UNREST AND RIOTING, IN GENERAL, HAVE BEEN IDENTIFIED AS A WORRYING FACTOR IN MILITATING AGAINST THE SMOOTH ADMINISTRATION AND MANAGEMENT OF OUR INSTITUTIONS OF LEARNING. KETASCO was shocked that Sokode SHTS had beaten them. They went back with irrepressible memories of the event hoping for a day to take revenge.

The final stage was how to crossover the Southern Zone hurdle which comprised Western Region, Central Region, Greater Accra Region, Eastern Region, and Volta Region. Having received the motion, which was SOCIAL MEDIA PLATFORMS ARE HEALTHY FOR STUDENTS, work to gather facts, figures, and real-life situations began. Poised for action and knowing very well that the Volta Region is going to host the contest, the pressure to win was unbearable.

Undaunted and unfazed, the big names such as Adisadel SHS, Chemu SHS, Fijai SHS, and St. Peter’s SHS, who represented their regions, did not throw the Sokode SHTS Debate Team out of gear. With eyes on the National Debate, they marched towards OLA SHS on the 25th January 2019 to battle formidable and respectable opponents. In this game of David and Goliath, our only hope was in God.

Sokode SHTS got the opportunity to debate them on a non-scoring basis. After all was said and done, the judges declared the results as follows: Sokode SHTS (225), Chemu (223), ADISCO (220), St. Peter's SHS (208), and Fijai SHS (204). The results came with mixed feelings. The students in the Volta Region were elated but their friends from the other side were sad as usual.

Then came the grand finale of the 62nd Independence Anniversary Celebration: 22nd Inter-Senior High School Debate, 2019. The motion for the debate was “IN PROMOTING LASTING PEACE AND UNITY, TRADITIONAL RULE OFFERS A BETTER OPTION THAN THE JUDICIAL SYSTEM.” All roads led to Bediako Hall, National GNAT Hostel, Adabraka on Thursday, 28th February 2019 to determine our destinies.

Though much is taken, much abides, and though

We are not now that strength which in old days

Moved earth and heaven, that which we are, we are:

One equal temper of heroic hearts,

Made weak by time and fate, but strong in will

To strive, to seek, to find, and not to yield

Motivated by the words of Tennyson, the Sokode SHTS Debate Team resolved to annex the position and this came at a cost. It was all about hard work. With faces as a flint, the team forged on to strive, to seek, to find, and not to yield. Knowing that history does not remember second place, the ideal position we yearned for was first position in the finals between Acherensua SHS in the Brong Ahafo Region, representing the Northern Zone. The splendour and suaveness of the Acherensua SHS Team did not ruffle up our resolve to win. Our mantra was Who is the judge?/The the judge is God/And Why is he God?/Because he decides who wins or loses, not my opponents/And who is your opponent?/He doesn’t exist/And why doesn’t he exist?/Because he is a dissenting voice to the truth I speak (Carved from The Great Debaters)

The debate was on the motion: “IN PROMOTING LASTING PEACE AND UNITY, TRADITIONAL RULE OFFERS A BETTER OPTION THAN THE JUDICIAL SYSTEM.”

After the heated debate, it was joyous when Dr. Doris Yaa Dartey declared Sokode SHTS as winners of the 22nd Inter Senior High School Debate Grand Finale for 2019. The other two judges Dr. Badu Nyarko and Dr. Evans Aggrey Darko gave positive feedback to the debaters. The experienced judges applauded the debaters for raising good arguments to support claims and counter-arguments.

Management of Sokode Senior High Technical School led by Mr. Samuel Ayisah and his two assistants, Mr. Samuel Kosipa, and Mr. George Eworyi as well as the Regional and Municipal Directors of Ghana Education Service (GES), Volta Region, Hon. Benjamin Kpodo, MP, Ho Central, the Board Chairperson, the PTA Chairman and his executive, SOSTECH, the Chairperson and members of Volta CHASS, the parents of our debaters and our driver, Mr. Dennis Amanu, deserve commendation for making the vision a reality. This is just the beginning of greater things to come. It is the hope of all stakeholders that the present government and successive governments will do more to uplift more schools to a level where teaching and learning will be one of quality. Finally, equal attention, media representation, and sponsorship should be given to Debate Competitions from the district level to the national level.