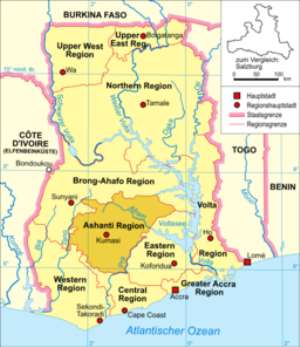 Center for Progressive Governance (CenProG) is a governance research and social advocacy group based in Ghana.

Over the last couple of years, we have contributed to critical national issues especially in the area of our good governance with analysis on both the government and the opposition parties.

Having conducted a research into how the NDC would fair against the NPP and which candidate was likely to give the ruling government a keen contest in 2020, it was realized that John Mahama would win the primaries by more than 85% of the votes. However, a whopping 14% of delegates in the NDC would base their decision to vote for the NDC in 2020 on the choice of running mate.

We therefore launched a research into how the choice of running mate would affect the NDC’s electoral fortunes in the 2020 elections. This research was conducted in the Ashanti Region (NPP stronghold) and will be replicated in all the regions. The choice of Ashanti region for this research was because if the NDC got 30% of the votes in the region, it was likely to win the General elections.

It is our hope that this report would serve its purpose and help in shaping our democracy through critical thinking and intellectual analysis.

We are grateful to all respondents who partook in this research; especially those with no political party affiliations. We like to express our profound gratitude also to our team of volunteers and everyone who helped to make this project a success.

Our volunteers visited 30 constituencies in the Ashanti region: 4 of which are NDC strongholds; 3 are constituencies the NDC can make a very significant impact and 23 are very difficult and/or NPP strongholds.

We agreed before the commencement of the project that due to limited funding and resources, it was impossible to visit all 47 constituencies in the region. Considering the fact that the electoral dynamics of most of the NPP strongholds are similar and also the similarity in the dynamics of the constituencies within the Kumasi Metropolis, we chose to collect data from 30 constituencies.

We also agreed that since most of the constituencies in the region had more than 100 polling stations, it would serve our purpose if we chose an equal number of respondents from each constituency. To also give a fair representation, we interviewed 20 party members and an equal number of persons who said they had no political party affiliations (floating voters). Most of the party members we interacted with said they either belonged to a branch or were branch executives. We did not interview any constituency or regional executive for this survey. In all, we interviewed 1200 people: 680 female and 520 male respondents.

A JOHN MAHAMA/VOLTA TICKET IS POPULAR WITH NDC MEMBERS, BUT NOT WITH FLOATING VOTERS

All respondents agreed that John Mahama is most likely to win the NDC presidential primaries by a landslide. A whopping average of 82.6% of respondents who were NDC members deemed the choice of running mate very important even though it would not affect who they voted for in the 2020 elections. It is however interesting to note that an average of 93% of floating voters from data collected believe the choice of running mate could affect which party they voted for in 2020. Among the NDC members, a John Mahama/Voltarian ticket is popular as they claim it would cure the apathy from the voters in their stronghold. This is however a sentiment not shared by floating voters as only 20% of floating voters appreciate such a ticket; 68% would prefer a John Mahama/Akan ticket; 10% would vote for a John Mahama/Ga running mate whiles a meagre 2% believe regional affiliations would not influence their decision. 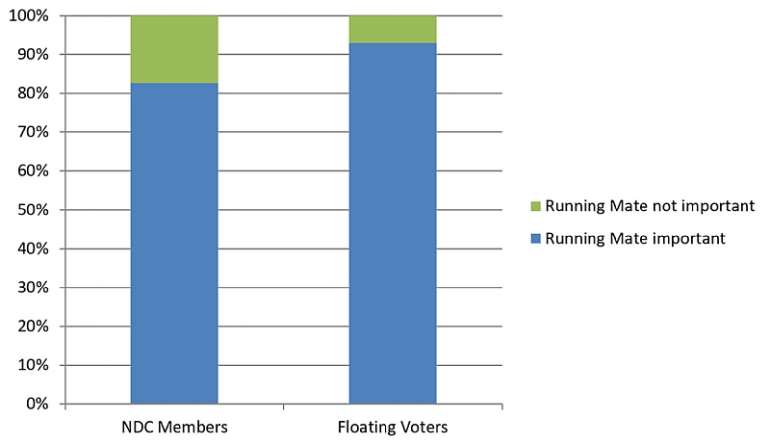 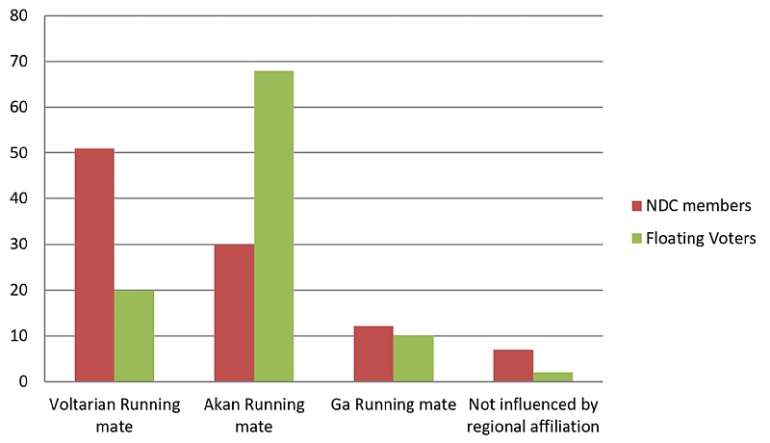 VOTERS WOULD PREFER AN AKAN RUNNING MATE FROM BRONG AHAFO AS COMPARED TO THE ASHANTI, CENTRAL OR EASTERN

52% of respondents who preferred an Akan running mate said they would most likely choose an Akan from Brong Ahafo over Eastern, Central or Ashanti. The NDC members based their choice on the fact that whichever political party won the Brong Ahafo region wins the general elections and believed that unlike those from Central who seem not to care whether their own was on the ticket or not, it would matter to the people of Brong Ahafo. The most prominent reason for this choice by floating voters was that the Brong Ahafo region deserved a shot at the presidency under the 4th Republic and what better way to do it than to partner John Mahama who has only one 4-year term. 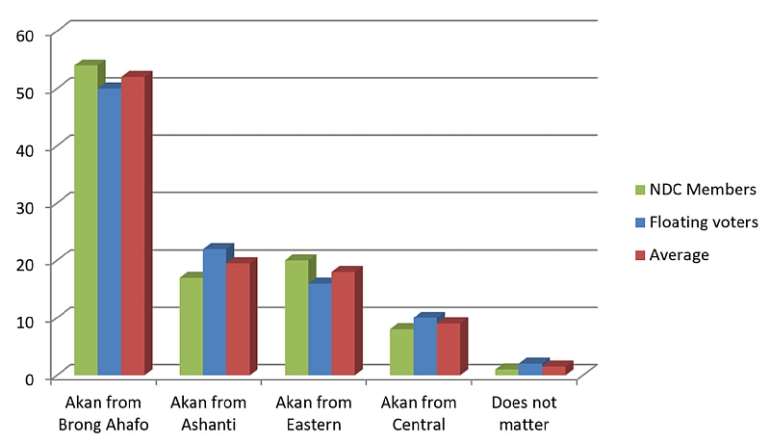 THE ECONOMY WOULD BE A KEY ISSUE IN THE 2020 ELECTIONS