Adding to the Whigham Chronicle: How tracing of my Scottish roots began 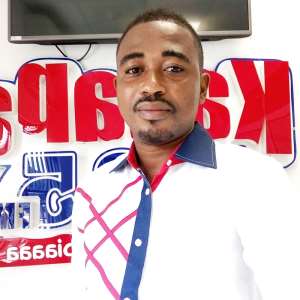 I grew up in a community with lots of Negroes - black skinned people. I was always curious in finding out why my father - Robert Dundas Whigham (Born 31st July, 1946) had lighter skin which was quite different from the people around me.

To add, my three siblings had the same colour, with the exception of me who took largely the colour of my mother - Christiana Ackah, a retired Ghanaian midwife born on March 1st, 1956.

At the age of 10, in 1995 when I was in basic school class 4, I started asking my father how comes he was fair because at the time his colleagues used to call him "obroni", an Akan name for white people. Akan is the largest tribe in Ghana.

He told me lots of things, but most of the things he said, he had less idea about them but gave me some indicators and clues. However, that is not his fault because his father (my grandfather) Robert Dandas Whigham never saw his father.

My grandfather was two months old when his father Captain Robert Dundas Whigham, born on 31st January, 1873 left the Gold Coast colony to Liverpool for his mandatory leave and never returned. However, some sources have stated that he returned to the colony. He was a top official of the West African Frontier Force, Gold Coast Regiment.

How I started
In 2004, after I had completed Nsein Secondary School, my father's back born Florence Whigham visited us. Immediately she saw the name (Dandas) on my trunk, she said the spelling of the name was wrong and corrected it to Dundas.

I had then bought nursing training form wanting to be trained as a nurse. But for three consecutive times (3 years), I couldn't gain admission. I had to look elsewhere.

The following year (2008), I left my parents and traveled from the Western part of the county (Sefwi-Wiawso) to Accra, the capital of Ghana to begin the process of getting admission to any possible tertiary institution. This was because most of my mates were progressing in life and I didn't feel comfortable.

Shortly, I gained admission to an unaccredited journalism institution - Manifold Institute in Accra. I never knew the school did not have the required papers to operate.

However, that was where everything began. At that time, I was called Dandas Whigham. In one of our ICT lessons, obviously my first experience having an internet on a computer, I googled my name and saw lots of information and pictures.

The first indicator on the screen was Gen. Sir Robert Dundas Whigham, and I remembered some of the things my father told me when I asked him why he was fair.

I drew the Director's attention on what I had seen on the screen. He was interested and directed me to the National Archives in Accra for additional information to confirm his presence here in Ghana.

At the archives department, I bought a form and registered. I begun to search and spent over three hours before settling on a name - Captain Robert Dundas Whigham. They brought his official personal file.

After seeing it and reading what was in the file, I became VERY emotional. It was a moment of sadness looking at his records and I "wandered" why must we suffer if indeed we relate to such a "great" person.

The next day, I showed copies of the file to my school's director (Mr. Anaman). He directed to the British Council in Accra for advice. Upon reaching there, a lady at the reception directed me to the Salvation Army because that was not their core mandate.

A worker at the Salvation Army - Mr Coffie, was extremely helpful to me. Through him, I traveled to other places in the country namely Kumasi, Cape Coast and Takoradi to collect additional useful documents to match them with what I had gotten already. That was when I got the 1907 gazette at the Cape Coast archives where Captain RDW's name was mentioned.

As at that time, I did not know any details about my grandfather. He died in June 1984 and I was born on July 1985. After going to where he worked - Ghana Railways and Harbour in Takoradi in the Western Coast of Ghana to collect his documents, that was when I saw that he was called Robert Dandas Whigham, born on 14th October, 1911. My father asked me to go there.

For a strategic reason, I added Robert to my name, swore affidavit and changed Dandas to Dundas because according to my father, I was named after my grandfather. Subsequent, I added Dundas to the names of my three siblings -Emmanuel Dundas Whigham and the twins Charles and Christina Dundas Whigham. This was in 2009.

Since then, I tried establishing direct contact with the family in the UK, but was unsuccessful.

The school became defunct due to some reasons. I left and attended Jayee University College, Accra and graduated with First Class in Journalism in 2015, after completing the previous year.

About my grandfather
Older people at his family house in the coastal city of Cape Coast lamented the kind of suffering he went through. He never saw his father. It was rather his mom's uncle - Mr. Acquah, who knew Captain RDW and thus gave the name to the child, and possibly misspelt the middle name.

Sources said the uncle was directed by the Captain to name the child after him. As to whether Captain RDW saw the child before he left on 22nd December, 1911, I can't tell.

Officially, my grandfather had four children. They were

The second born Robert Dandas Whigham travelled to Germany at the age of 18. At that time, their father had already gotten an opportunity for him to be trained at his (father) work place as an artisan, but because he wasn't around then, the father didn't want that chance to go wasted. He sent my father (Charles) to occupy that space, they did not correct the name.

Since then, he had been using that name and all his working documents have been RDW.

My motive for carrying out this assignment had never been seeking for any goodies for my family, but to get the two families get in touch.

Apart from establishing direct contact with a great grandson of Walter K. Whigham from Facebook whose name is Charlie Whigham, I have since not established any contact with neither the descendants of Gen. Sir RDW or Maj. (Captain) RDW. Walter was one of the siblings of David Dundas Whigham.