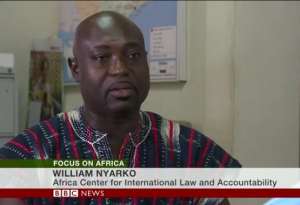 President Akufo-Addo after being briefed of an assault case of a policeman brutalizing a customer at a branch of Midland Savings and Loans in Accra coupled with the recent police shooting incident in Asawase in the Ashanti Region mentioned that government will establish a committee of inquiry to look into the events and make recommendations going forward.

It is as a result of this response the Executive Director stepped-in to advice the president that such a committee is needless and urged him to rather concentrate on the implementation of IPCC.

“Mr. President respectfully we don’t need a ‘conumtea’[committee] to investigate the conduct of police officers, he jovially added.

The Executive Director further noted that instead of establishing a committee on matters like this where final reports of committees have always been left to rot on the shelves, it was important the state allows the criminal justice system to work in bringing unprofessional security personnel to the full rigorous of the law.

“We have to allow the criminal justice system to work by prosecuting these officers and if they are found guilty, they should do time in prison in accordance with due process’, Mr. Nyarko noted.

Following the Midland Savings and Loans police brutality, the police hierarchy has interdicted the officer involved in the alleged assault case and commenced investigations into the conduct of the police officer.

The assault has resulted in many social media condemnation. Some civil society groups and individuals have come out to condemn the action and have urged stricter punishment to be taken against the policeman Federick Ammanor. However, the family of the policemen in an interesting twist apologized to the public and the family of the victim and stated that their relative “usually” beats up women.