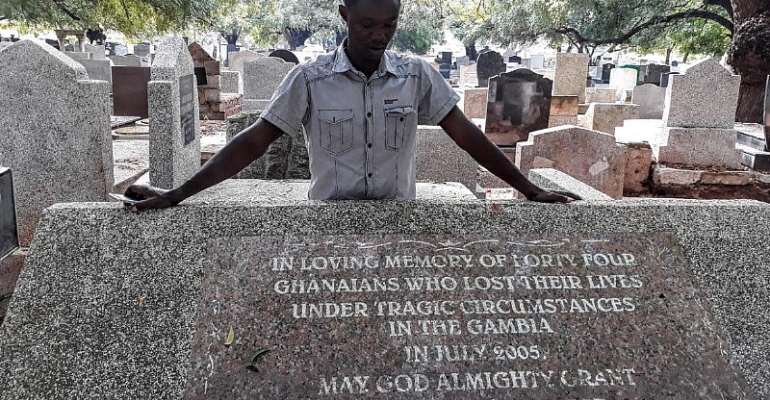 Reports seen by The Manual have revealed that then Foreign Affairs Minister and now president of Ghana Nana Akufo-Addo nearly fought with his Gambian counterpart, Bala Gaye in Banjul when he led a delegation to Gambia following the murder of 44 Ghanaians.

This was contained in the 17th -18th June 2009 Edition of the Foroyaa Newspaper where then Gambia president Yahya Jammeh - for the first time since the murder of 56 migrants in July 2005 in Gambia, broke his silence on the issue. was after the joint ECOWAS and UN investigations into the murder exonerated Jammeh and his government from being directly or indirectly involved.

Then Gambian leader mentioned that upon seeing the eight bodies that were deposited in Ghana town, in Gambia, he invited Ghanaian community, African missions and all diplomatic representatives in Gambia to go and identify them, but were unable to do so, even though he [Jammeh] insisted that they [bodies] “must” be Ghanaians.

According to him, when the bodies could not be identified after more than three weeks, he directed they should be buried because the bodies “were occupying space” at the morgue. Few days after they were buried, then Ghana leader, President Kufour sent envoy to Gambia on the issue. Here was when Mr. Jammeh stated that Ghana foreign affairs minister Nana Akufo-Addo lost his cool.

"And interestingly, when countries are put into alphabetical order, you have Gabon, Gambia, and Ghana. And at the AU, we sit side by side. As I said, this sad episode did not interfere in my relationship with the then President of Ghana, Kufour. But then the foreign minister of Ghana [Mr. Akufo-Addo] almost fought the foreign minister of the Gambia, Balla Gaye in his office”, Jammeh said.

The Gambian leader further mentioned that Mr. Akufo-Addo had a presidential ambition and was leading a “campaign” against Gambia government for being responsible of the murder in order to shutter his [Jammeh] dreams of becoming ECOWAS Chairman.

“I told him [Akufo-Addo] it was a campaign against the Gambia to host the 2006 AU Summit. Not only that but also for me to be Chairman of the ECOWAS and that time my best ally in West Africa was Mauritania and Ghana and so killing of the Ghanaians will create problems between me and Ghana”.

“As far as I know, you [Mr. Akufo-Addo] wanted to use this as politics so as to contest for the next presidential election [2008]. I will tell you if that is the case, you are not going to win the election. We have nothing to hide”, Mr. Jammeh claimed.

Ritual killings, fight at sea cause of deaths

After Yahya Jammeh was exonerated by ECOWAS and UN for having no hand in the murder of 44 Ghanaians and eight Nigerians in Gambia, he accused Ghana for being directly involved in the killings.

He stated that it was as a result of “ritual killings” in Ghana and fight at sea by some “fishermen” as the cause of deaths. He said during that period (2005), there were rumours of some strange ritual killings ongoing in Ghana.

“Originally when the matter was reported to me, what I thought was maybe ritual killings, because at that time also there were some cases going on in Ghana of ritual killing. There were a lot of rumours of some strange rituals. The other thing that came to mind was that they were all predominantly fishermen. They might have had a fight at sea or somewhere and these people were killed”, Jammeh noted.

Funeral contribution paid was not compensation

Another element worth mentioning in his interview with the newspaper was the issue of compensation. Throughout the interview, he consistently said his government would not regard the money ($500,000) sent to Ghana for “funeral” preparation and re-burial as compensation.

According to him, it was on “humanitarian grounds” and “African solidarity” that caused his government to play that monetary role and not accepting responsibility of the murder.

He added that this was part of the campaign championed by Mr. Akufo-Addo to let Gambia accept the responsibility of the murder and pay compensation, thereby making Gambia liable to the killings.

Yahya Jammeh still insisted that they would not pay any compensation to Ghana, and according to him, paying compensation could make them “guilty” of committing murder.

“We are not going to pay for compensation; to compensate for what? I made it very clear that if they insist on compensation, we will not accept it simply because we are not responsible for those deaths. That is what we are doing out of humanitarian and out of African solidarity”, then Gambian leader noted.

Yahya Jammeh has been in exile in Equatorial Guinea after losing December 2017 elections to current president, Adama Barrow. Experts say for Jammeh to be extradited to Ghana to face charges and trial for his crimes, the leadership of Ghana must take the leading role.

Reports say that government has received a request by campaign groups Human Rights Watch and Trial International on the extradition and trial of Jammeh to Ghana to face justice. One of the people who will be very happy to see him face trial is Martin Kyere, the only known survivor.

Contact made to the presidency has not been responded to at the time of filing this report. The Manual has also made contacts to Equatorial Guinea. When Yahya Jammeh responds, readers will be well informed.