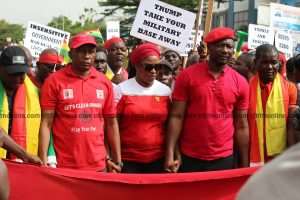 Some opposition political parties in the country have served notice of staging a demonstration in Accra on Thursday, February 7, 2019, to protest what they described as the “barbaric and brutal violence” that marred the Ayawaso West Wuogon by-election.

The political parties who want to be referred to as Inter-Party Coalition for National Sovereignty claimed there is a growing atmosphere of insecurity in the country hence their decision to embark on the demonstration.

The demonstration dubbed 'Aagbe wo' which means, “we are being killed” seeks to bring Ghanaians together to send a clear signal to the government to check the level of security in Ghana which they claimed threatens the country’s democracy.

In a statement signed by the convener of the Coalition, Bernard Mornah, they have already notified the police of their planned demonstration during a meeting with the Greater Accra Regional Command.

The converging point for the demonstration is at the Old Obra Spot, Kwame Nkrumah Circle.

“We announced our intention to embark on a massive demonstration dubbed 'Aagbe wo' demonstration to draw public attention to the looming threat on our democracy, peace and stability as well as to press further our demand for proper and speedy investigations into events of last Thursday's by-election.”

“As required by the Public Order Act 1994, Act 491, we wrote to notify the police and have subsequently had a fruitful meeting with the Greater Accra Regional Command.”

The advertised route for the demonstration is the Obra Spot through to the Farrisco traffic light – UTC –High Street-Ministry of Interior – Police Headquarters and finally converge at the Jubilee House.

According to the Inter-Party Coalition, they had already also assured the Police service of a “very peaceful and non-violent demonstration”.

The Inter-Party Coalition also called on well-meaning Ghanaians to join in the demonstration as they protest what they describe as a breakdown of law and order in the country.

“We are by this statement calling on all well-meaning Ghanaians to join in this mass action against oppression, injustice, electoral violence, vigilantism, police brutalities, rampant kidnapping and the breakdown of law and order,” the statement added.

Which parties make up the coalition

The leadership of the Inter-Party Coalition For National Sovereignty includes the CPP, GCPP,

Violence marred last Thursday's by-election at Ayawaso West Wuogon with reports indicating that several people were injured in the clashes while gunshots were heard at the La Bawaleshie polling centre.

The heavy presence of security at polling stations for the by-election was a point of worry for some observers including the Coalition of Domestic Election Observers (CODEO) who raised concerns of the intimidation of voters.