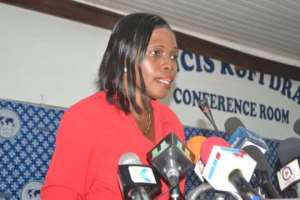 A survey conducted by the Department of Political Science, University of Ghana, Legon, reveals that majority of Ghanaians are happy with the 2year performance of the ruling New Patriotic Party (NPP).

Over 56 per cent of the respondents said the party has demonstrated that it has what it takes to deliver on its campaign promises.

Another 57.7 per cent admires the NPP's manifesto and its programs.

Dr. Maame Gyekye-Jordon, the Head of the Department, who presented the findings of the study, said about one-third of the respondents - 33.2 per cent, however said they are unimpressed.

It sampled the views of 5,000 voters, selected from 590 electoral areas in 80 constituencies and 50 Metropolitan, Municipal and District Assemblies, nationwide.

The study sought to assess the views of voters and potential voters in deciding the performance of government and their confidence in its management of the affairs of the country, two years into its mandate.

It was carried out, between December 8 and 24, 2018, and this was done with support from the Konrad Adenauer Stiftung, a German Political Foundation

Dr. Gyekye-Jordan said when the question was put, 'If elections were held today, which political party, will you vote for?'', 2,481 of the respondents, representing 49.6 per cent said they would give their votes to the NPP, while 1,667 respondents (33.3 per cent), preferred the opposition National Democratic Congress (NDC).

She said 63.6 per cent of respondents applauded the implementation of the Free Senior High School (FSHS) policy.

It came out that 51.2 per cent of them said the policy has made education accessible to the youth.

Even though the study showed that overwhelming 82.1 per cent of respondents labeled the policy as good, 72.7 per cent think it is facing some challenges - inadequate infrastructure, feeding problems, double-track system and placement issues.

She said 47.7 per cent, ranked inadequate school infrastructure higher over the Double Track System, representing 12.4 per cent as a challenge of the FSHS policy, while feeding problems and placement challenges, were a bother only to a few, 5.7 per cent and 1.8 per cent respectively.

Again 78 per cent of the people said they have been following the double track system 'very closely', and 33.3 per cent of them thinks that the system is a good policy, but 45.5 per cent disagrees.

The Planting for Food and Jobs and the One District One Factory programmes also received high ratings with 60.8 per cent of the respondents expressing confidence that they would lead to economic progress and prosperity.

In excess of 25 per cent, however, expressed doubt.

Unemployment, corruption, one-district-one factory, and inadequate roads remain areas many of the voters want the government to do more to meet their expectations.

The study showed that job creation ranked high among the unfulfilled expectations of voters representing 19 per cent, followed by one district-one-factory with 17.7 per cent and road construction representing 15.6 per cent. GNA