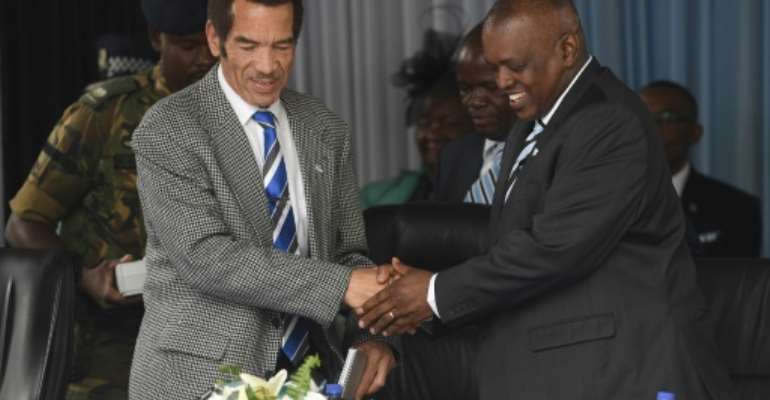 Masisi, right, took power in April when Khama, left, stepped aside after serving the maximum 10 years in office. By MONIRUL BHUIYAN (AFP/File)

A feud between Botswana President Mokgweetsi Masisi and his predecessor Ian Khama has erupted afresh after the ex-leader condemned US President Donald Trump as "arrogant and racist".

Masisi, who was hand-picked by Khama, took power in April when Khama stepped aside after serving the maximum 10 years in office.

But the two men have since fallen out in a public spat that threatens to undermine Botswana's carefully-crafted reputation for stable government.

Masisi last month used his first state-of-the-nation address to openly attack his predecessor, saying the "transition from the previous administration has not been as smooth as expected".

Then, addressing villagers last week during a meeting in his capacity as a traditional chief in his rural home of Serowe, Khama described Trump as "arrogant and racist".

The foreign ministry issued a statement on Saturday dissociating itself from the remarks.

"These disparaging remarks... do not in any way represent the position of the government of Botswana," said the ministry.

It said Khama is entitled to his personal views, "but the ministry is concerned that the usage of the kgotla (traditional) meeting by the former president to castigate a president of another country may be misconstrued as espousing an official position of the government".

On Sunday, Khama said he would not give up criticising poor governance and violation of democratic principles and human rights by other countries.

"The ministry is free to abandon those principles and ignore Donald Trump's present and past disrespectful tendencies which he clearly displayed... sometime ago, in the way he referred to countries in Africa," he said in a statement.

"I am proud that when I was president, Botswana was one of those that criticised him over those insulting and racist remarks," said Khama.

Trump's "attitude is motivated by what I have said before and I repeat again, his arrogance, intolerance, extravagance, and his allergy to telling the truth".

The latest spat has again laid bare the frosty relations between Khama, 65 and Masisi, 57.

The former president has reportedly been enraged by Masisi's refusal to let him use government planes, while state media have been instructed not to feature Khama.

The two men have also battled over the former boss of the Directorate of Intelligence and Security Isaac Kgosi, who was sacked by Masisi for insubordination.

Khama, 65, has sought to employ Kgosi as his private secretary but has been blocked by Masisi.