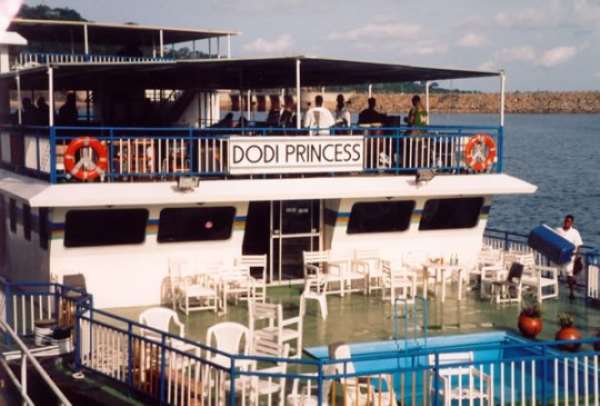 Akosombo, Nov. 19, GNA - The Ministry of Tourism and the Modernisation of the Capital City was fast-tracking its plans to develop all potential tourist sites in the country in line with government's Strategic Action Plan to make Ghana the preferred tourism designation in Africa.

The Ministry, in collaboration with other strategic partners and stakeholders, had embarked on an aggressive marketing and product development exercise of the sites.

Mr Jake Obitsebi-Lamptey, the Sector Minister, announced this in a speech read on his behalf at the re-launching of the M.V. Dodi Princess at Akosombo on Friday.

The Akosombo Hotels Limited (AHL), a subsidiary of the Volta River Authority (VRA), refurbished the boat this year, after the Authority transferred it to the company last year to ensure quality tourism operation of the boat, first acquired as a cargo boat in 1991. Mr Obitsebi-Lamptey said the Ministry recognised that one of the key benefits of the Volta River Project was the development of tourism in the Volta Basin, adding that, the Volta Hotel and the Dodi Princess have become the springboards to that effect both in the Asuogyaman district and the Volta Basin as catalysts for the much expected tourism boom in the country.

He regretted that the Dodi Island, which was the focus of the boat cruises, was like most attractions sites in the country, in its raw state, which made visitors who set out to the place with high expectations, always returning disappointed.

Mr Obitsebi-Lamptey hinted that the Ministry had initiated discussions with the VRA and other interested stakeholders on the development of the island in particular and the Volta Basin as a whole. He expressed the hope that professionalism and quality service exhibited at the Volta Hotel would be replicated on the boat.

The Board Chairman of the AHL, Mr Joshua Ofedie, in an address read on his behalf, said the Board was committed to the development of tourism on the Volta Basin, within the context of a balanced ecosystem and in an environmentally responsible manner.

According to him, the ultimate goal was to make Akosombo and the Volta Basin one of the key tourist enclaves in Ghana and the sub-region, capable of generating employment in the area and the country as a whole. The General Manager of the AHL, Mr Seth Asante, said between July and October the refurbished boat would have improve the quality of service to make the Dodi Island more attractive to tourists, saying it had made 33 cruises and carried 5,449 persons.

He said the company had plans to develop the Dodi Island into a botanical garden and invited the Ghana Dance Ensemble to train the local community to improve on their cultural dances, and promote local market conditions on cruise days to meet quality standards.

The General Manager called on investors to team up with the company to expand the Akosombo Hotel and develop the Dodi Island.

Mr Asante said the AHL won the Ghana Tourist Board's "Hotel of the Year (3-4 Stars) Award for 2003 and a Gold Award for "Excellence in Business Practice" in 2005 by the Foundation for Excellence in Business Practice based in Geneva, Switzerland in September this year. The ceremony, which included a four-hour cruise to the Dodi Island with the Akradehene, Nana Okru Kata, the Malaysian High Commissioner to Ghana, Mr Mahalil Baharam and some business executives.

LEKMA cluster of schools shut down temporarily as police cha...
3 hours ago