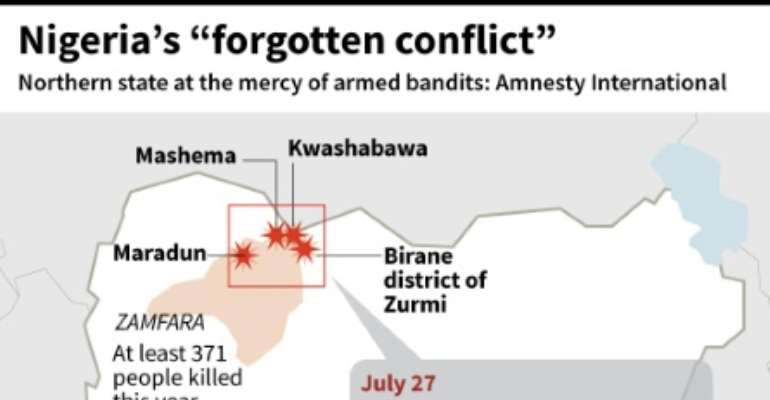 Nigeria's Zamfara state has been plagued by violent crime throughout 2018, with Amnesty International warning in July that people living in the impoverished state were "at the mercy" of armed bandits who take hostages and raid villages. By Laurence CHU (AFP/File)

Nigerian police claimed on Friday that over 100 "bandits" had been killed in a crackdown targeting crime in the northwest state of Zamfara, following a surge in kidnappings for ransom and cattle rustling.

Zamfara has been plagued by violent crime over the past year, with Amnesty International warning in July that people living in the impoverished state were "at the mercy" of armed bandits who take hostages and raid villages.

A joint operation team on Thursday "repelled ambush attacks from armed bandits" at Mahanga Forest in Zamfara State and "in the process killed one hundred and four bandits," national police spokesman Jimoh Moshood said in a statement.

Confirming the death toll Moshood told AFP: "Yes, 104 bandits (were killed). Not people, armed bandits that had been terrorising and killing innocent people."

Over 1,000 policemen had been deployed to Zamfara at the beginning of the month, the statement said, adding that since then 85 people have been arrested in connection with kidnappings and cattle rustling.

Amnesty International Nigeria spokesman Isa Sanusi said it was difficult to assess the success of security operations in the remote region.

"In many cases, the pronouncements of security agencies are quite contrary to the situation on ground in Zamfara state," Sanusi said.

"Bringing the killers to justice is more important in taming the tide of impunity that allowed the security situation in Zamfara state to continue deteriorating."

The kidnappings are just one security concern putting pressure on Nigerian President Muhammadu Buhari who is seeking a second, four-year term in closely contested February polls.

Facing criticism for an increase in Boko Haram jihadist attacks, among other security threats, Buhari is working to show that his government is able to tackle rising violence in Nigeria, Africa's largest oil producer.

The problem has sparked the concern of neighbouring Niger.

In August, Niamey announced it was sending security reinforcements to the Maradi area on the south-central part of the border, which abuts Zamfara.

Nigeria's interior minister said in October that at least 30 bandits were killed in their troubled frontier.

In the last two years, kidnapping for ransom has reached unprecedented levels in the region, where entire villages have been deserted for fear of raids and kidnapping by criminal gangs.

Those abducted are often released within days if the ransom is paid but residents say they can be killed if no money is forthcoming, and their bodies dumped in the bush.