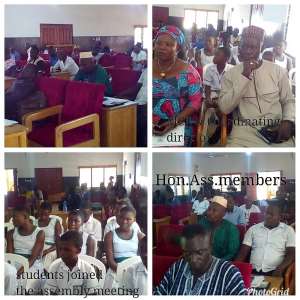 Ordinary Assembly meeting which was held at the Nkoranza South Municipal Assembly on the 29th and 30th October 2018 to assess the performance and the strength of the assembly including the Municipal Chief Executive of the area.

The Municipal Chief Executive, Madam Diana Attaa-Kusiwaa stated that the Executive Committee of the assembly has called on the Assembly should put-up a pen to house stray animals arrested by the Environmental Health Unit. She, therefore, made it to the house, while the EXECO accepted for consideration by the House.

Hon. Diana Attaa-Kusiwaa hinted the education sector by calling on the Municipal Directorate of Education should sensitize the general public on the Double Track System on the FM stations and information centers across the Municipality since the people do not understand it.

Madam Diana Attaa-Kusiwaa disclosed that the Assembly Members should be involved in the issuance of the fertilizer coupons to the farmers since they would be in a position to identify the farmers in their electoral areas to avoid unscrupulous people diverting the subsidized fertilizers to the dealers for a fee when speaking in the Agriculture Sector.

Nkoranza South Municipal Chief Executive, amazingly in the health facility said, the third Ambulance into a hearse since all efforts to get the equipment to make that vehicle function as an ambulance had proved futile.

In health sector she therefore hammered about the several complaints about poor attitude of nurses and other health staffs at the facility, more especially the Maternity Block and moreover, advised the health workers in the Nkoranza South Municipality to lead in a good behavior so as to invite all the hospital management to explain why some of these things happening at their facility.

Asking the security to do well to protect the people of Nkoranza and it areas. Therefore recommended that the Police should devise alternative means by which they can be contacted in times of emergencies since the official line at times does not go through.

Calling on Police (MTTD) should strongly intervene to stop the underaged from riding commercial Tricycle (Okada) and Motor kings.

Municipal Chief Executive(Hon), DianaAttaa-Kusiwaa appealing to all her Assemblymen and the technocrats to put themselves in the Revenue while assisting to grab a huge amount of revenue during the duty.

According to her(Hon.MCE), the Assembly is facing a lot challenges about the Internal Generated Fund (IGF) why because the revenue is not booming, especially they don't pay property rates and that is the difficult tasks.

Hon. Diana Attaa-Kusiwaa(MCE) finally, made it clear on the Women and Children Fund(WCF) by setting up of fund to provide assistance to needy children and women with start-up capital which she recommended Business Advisory Center (BAC)to.