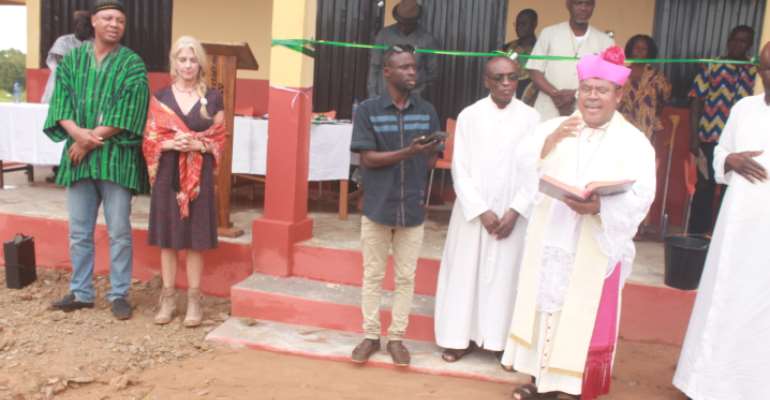 The Catholic Diocese of Damongo has constructed a six-unit classroom block for St. Theresa Primary School at Canteen in the West Gonja District of Northern Region.

With full funding from the Cross Catholic Outreach of USA under the Pope's Council of charity,the cost of the building is Ghc485,000 and comes along with an ultramodern office complex,headteacher's quarters and a storehouse.

The Bishop of the Diocese of Damongo who doubles as the chairman of the Ghana Prisons Council, Most Rev. Peter Paul Angkyier at the inaugural ceremony covered by Ghanawebs' Ananpansah,B Abraham,said Catholic education aims at promoting the wholistic and integral development of the youth, adding that,intellectual knowledge without the fear of God and dedication to service cannot lead to any meaningful development.

He said,a central dimension of the mission of the church is education and human promotion which dates back to the time of the early missionaries.

"Through Catholic education with its focus on the human person who is in relationship with others, we promote integral and wholistic development of the youth...Indeed,education is the key to development,but intellectual knowledge without the fear of God,without the spirit of dedication to service, without discipline,sacrifice and hardwork cannot really lead to any meaningful development. Our believe as Church is that, religion is the soul of education,"he said.

The event according to him,underlines the commitment of the Catholic Church to the development of the children and youth who are leaders of the present and future.

He said the country has no future without a responsible youth who are well prepared to develop their gifts and talents for leadership and service and education is the means to achieving this aim.

He thanked the donors,Cross Catholic Outreach for assisting the Catholic Church to fulfil its dream of bringing quality education to the children of the community.

Quoting Pope Francis,he said structures in themselve mean nothing unless there is a Godly spirit to drive them towards the purpose for which they were established.

He called for a collaboration between all the stakeholders to realise the full benefits of the structure.

Mrs.Mary Thereni,who represented Cross Catholic said she was very happy to be in Africa for the first time and that first time is in Ghana and for that matter, Damongo-Canteen.

She said they were very happy to have such a strong partnership with the Catholic Church,and that they believe in the dignity of every human person.

The school project she disclosed,is a donation from a woman who feels she is blessed and takes it as a responsibility to bless others.

"We believe in the dignity of every human person.All people should have the opportunity of a good education and social services...

The school you see here,is from a donation from a woman who feels she has been very blessed and feels it is her responsibility to be a blessing to others, Mary Stephen Swaister is the donor from Cross Catholic.She is a wonderful wonderful Catholic woman and a very dear friend of mine,"she said.

She further stated that,her organisation acts as a bridge for people to learn and share,and even though they bring the school project as a gift, they expect a gift of support, joy and resilience from the managers of the facility.She revealed they have already been building in Damongo, water wells and they have plans to build two more schools.

The Member of Parliament for Damongo constituency,hon.Adam Mutawakilu said his collaboration with the Catholic mission dates back to his days as a DCE. He confessed everywhere he goes in the constituency,very remote villages,the presence of the Catholic church is felt.And that, the contribution of the Catholic Church to the development of the district is so enormous.

In his own small ways, he said he has been contributing to the educational pursuits of the district and will continue in that regard as an MP.

He thanked the Bishop for his instrumented role in the development of Damongo in terms of education,health,water and many more.

He prayed for sustainability and continuous collaboration among all stakeholders to realise the full benefits of development.

The government and the church according to him,were partners in development, adding that,the free SHS and free exercise books intervention by the government has relieved the burden of parents.

He said howbeit,the Local Government Act empowers the assembly to be in charge of the integral development of the district,they cannot do it alone,due to the limited resources.And the surest way,to accomplish the task of delivering essential services to the people is through partnership with organisations, such as the Catholic Church.

He said the church should sensitise its people to vote YES for the Savanna region.

The Human Resource Director of GES,Mr.Amos Mahama who represented the District Director fully accepted the facility and promised he was going to staff it with the requisite teachers.

He said the office appreciate the intervention of faith based organisations in education service delivery in Ghana and West Gonja in particular.

He called for a strengthened collaboration between the church and the education office,assuring teachers of continuous moral and educational support.The facility he said, was going to be put into maximum use.