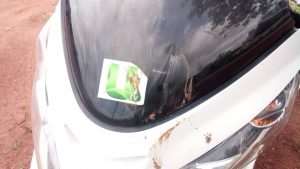 The Northern Regional Chapter of the Ghana Journalists Association (GJA), has condemned an attack on some journalists by irate students of the Nyankpala campus of the University for Development Studies (UDS).

They were invited by the school’s authority to cover the 25th Matriculation.

He has since lodged a formal complaint with the Lamashegu Divisional Police Command.

The attack was linked to a purported sex party organized by the Nyankpala campus Students’ Representative Council (SRC) leadership that went viral on social and mainstream media.

Chairman of the Northern Regional Chapter of the GJA, Caesar Abagale, in a statement condemned the attack and demanded an unqualified apology from the university authorities.

“The attack is primitive, barbaric, callous and backward and blatant attack on press freedom. This must not be encouraged and the GJA condemns the act. We are even more surprised that students who are in school to learn and whose parents are toiling to pay fees are rather concerned about organizing sex parties other than exploring employable and business opportunities.”

Caesar Abagale gave the university authorities one week ultimatum to replace the damaged equipment and served notice of the media blacklisting the UDS if the issue is not immediately addressed.

“We are giving the UDS authorities seven days to swiftly respond to our demands so as not to mar the long working relationship between it and the media.”

“The GJA respects the UDS and cherishes the working relationship that had been forged over a long period. We are therefore calling on the U.S. authorities to institute immediate sanctions acceptable to GJA including replacing damaged equipment and paying for hospital bills as well as offering an unqualified apology to the reporter, UTV and the GJA.”

He further appealed to the police to fast track their investigations and bring the perpetrators to book.

“I am calling on the police to immediately arrest the Nyankpala campus SRC President of the UDS and thoroughly investigate the matter.”