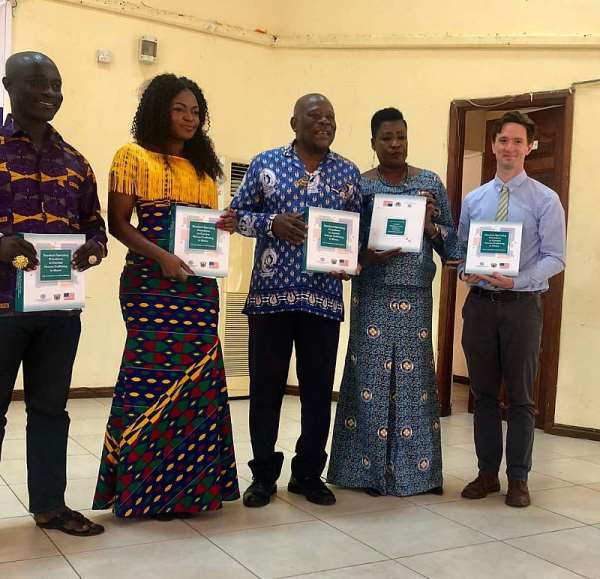 The Volta Regional Secretariat of the National Democratic Congress (NDC), has congratulated the member of Parliament for North Dayi Hon Joycelyn Tetteh, for being named the Anti Human Trafficking Ambassador for Ghana by the International Organization on Migration during the Regional Launch of the Standard Operating Procedures( S.O.Ps ) to Combat Human Trafficking.

"We celebrate you for the unprecedented honor this has brought to the Chiefs and People of North Dayi, the Volta region, and the NDC family in particular"

In a statement signed by Mr James Gunu the party regional Secretary and released to the media last week, the party expressed its appreciation for her initiative in tackling the menace of modern enslavement known as Human Trafficking

It noted that the UN defines Human Trafficking as the recruitment, transportation, transfer, harboring, or receipt of persons by improper means such as force, abduction, fraud, or coercion for an improper purpose including force labor or sexual exploitation.

The Anti Human Trafficking Unit AHTU of the Ghana Police Service reports that, 61 percent of all trafficking cases reported in Ghana were labor related, while 39 percent were sexual exploitation cases.

Trafficking in all forms mostly impacts women and girls.

According to Myjoyonline.com report dated 29-06-2018 and published by Abubakar Ibrahim, Ghana's ranking for 2018 'Trafficking in Persons' has improved. The report indicate that, Ghana's fight against human trafficking has received an international recognition as the latest Trafficking in Persons (TIP) has upgraded the country's Tier 2 Watch List to a Tier 2 ranking in the 2018 TIP Report.

Although Ghana does not meet the minimum standards for the elimination of human trafficking, these increased efforts have resulted in the upgrade.

It would be recalled that, on June 28, U.S. Secretary of State Mike Pompeo released the 18th annual TIP Report. The report assesses the efforts of governments around the world to fight human trafficking, including in the United States.

The Trafficking Victims Protection Act (TVPA) of 2000 as amended requires the U.S. Secretary of State to submit an annual report to Congress.

The goal of this report is to stimulate action and create partnerships around the world in the fight against trafficking in persons.

The TIP Report recommendations include: dedicating increased resources to holding traffickers accountable and providing care to victims, addressing the corruption and interference that impede the investigation of trafficking crimes, and developing and providing specialized services for child and adult victims of sex trafficking.

Increased efforts each year are necessary for a government to maintain or improve a Tier ranking. Ghana’s steps in the right direction in 2017 demonstrate how much can be achieved through the government’s committed action and its meaningful partnerships with civil society.

U.S. Ambassador Robert Jackson stated, “Ghana has made great strides during my time here to combat human trafficking, but there is still a long road ahead.”

The Ambassador reiterated that the U.S. government remains committed to partnering with the Ghanaian government and Ghanaians, in general, to eradicate modern-day slavery in the country, and throughout the world.

The Standard Operating Procedures ( S.O.Ps ) will serve as a one stop reference point and guideline for identifying and handling human trafficking cases.

"The Party sees this honor as a duty call, service to humanity and most significantly the qualities of a competent woman with passion for the job"

"We wish you well in your Ambassadoral duties. Once again Congratulations"