Liberian And Swedish Police In Ghana To Learn 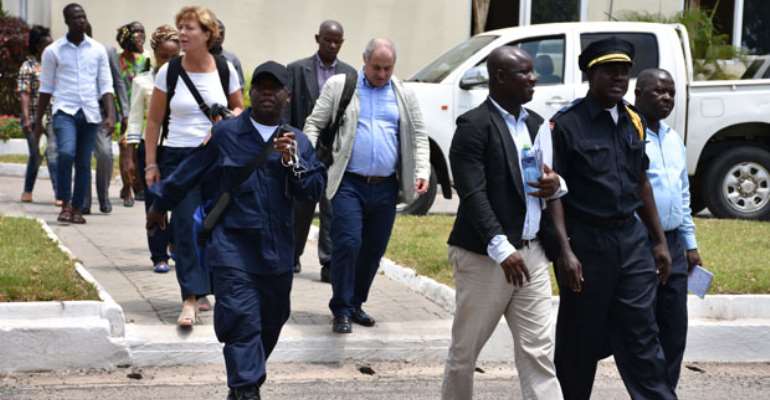 An 18-member delegation from Liberia and Sweden has paid a study visit to the Ghana Police Service (GPS) to equip them with knowledge and skills in forensic science lab, sexual and gender-based violence-related crimes.

Addressing the delegation, the Deputy Director General in charge of the Criminal Investigations Department (CID), Assistant Commissioner of Police (ACP) Francis Aboagye Nyarko, emphasised the need for cooperation among these countries in this global age.

He said the GPS is prepared to impart and share knowledge in order to jointly fight crime which has become transnational.

Giving the genesis of the GPS, the Chief Staff Officer, ACP Francis Chidi, said the Police Service from its establishment in the colonial days to this present stage has worked with both civil and military governments and has been able to perform its mandate well.

He said currently the vision of the GPS is to be a world-class police service capable of delivering planned, democratic, proactive and peaceful services up to the standards of international best practices.

The Director in charge of Operations at the CID Headquarters, ACP Mr. Joseph Oklu Gyamerah, also gave an overview of the CID Administration from its establishment in 1921 to date.

He mentioned some key units of the department including cybercrime unit, documentation and visa fraud section, anti-armed robbery unit, homicide, including commercial crime unit and its functions.

Speaking on behalf of the delegation, ACP Varney Ali Sheriff of Liberia Nation Police lauded Ghana Police for their achievements both locally and internationally.

He said Liberian Police during its reformation age took its root and training from Ghana Police.

“We are ready to learn more from Ghana to build a strong Liberian Police Force,” he stressed.