One student killed, eight injured in a gory accident in Ellembelle 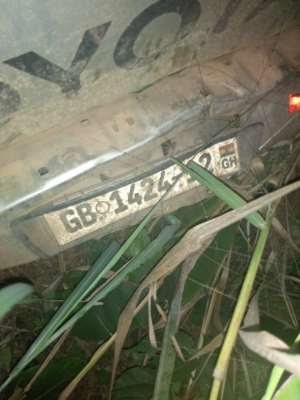 A student of Asanta Seventh Day Adventist Junior High School in the Ellembelle District of the Western Region has been killed in a gory accident with 8 others severely injured.

The incident occurred between Asanta and Bobroma road on Thursday, September 20, 2018 when these school children were returning from school.

Giving her account, Georgina Ahoakpole, a student who witnessed the accident said a Toyota Hilux with registration number GB 1424-12 from Sinopec Company heading towards to Takoradi veered off the road to the pedestrian walkway where they were.

According to her, they tried running but the fast moving vehicle run over two of the students killing one on the spot.

"We were 15 returning from school when we saw the driver off the road heading towards us and run, the driver knocked down the two who informed us the car was coming towards us so we should all run "

She said.
The eight, who managed to escape sustained various degree of injuries and are currently receiving treatment at St. Martins De Pores Hospital.

A later check revealed that the drunk driver who works with Sinopec camp, a Chinese company was heading towards Asanta, a community which is just about a minute drive away from his company.

The police who arrived at the scene took the driver for questioning.

Source close to the police says "The driver was very drunk so the police has took him (driver) to Adamus Mining Company to test the alcohol level of the him".

A visit to the Bobroma Community where the children come from, today, Friday, September 21, 2018, seven of the pupils are currently receiving home treatment but one is still at the Eikwe Hospital receiving treatment.

The remain of the 13-year-old of the Asanta S.D.A Junior High School has been deposited at the Axim Government Hospital mortuary awaiting autopsy.

Police in the District have begun investigations into the incident.