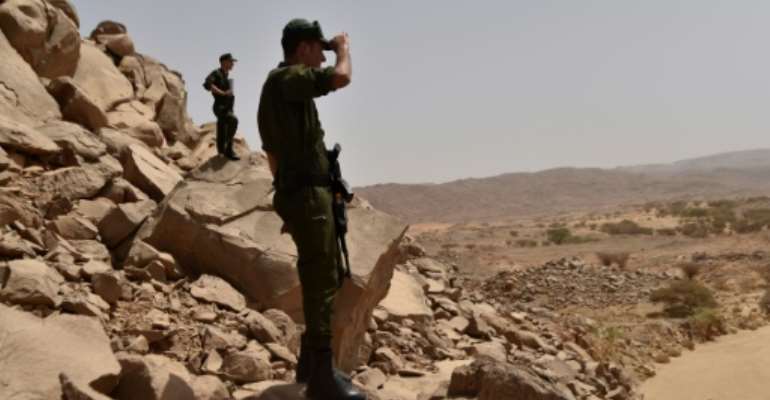 Algerian security forces patrol in the desert some 2,000 kilometres south of the capital Algiers on July 2, 2018. By RYAD KRAMDI (AFP/File)

Algeria's defence ministry on Tuesday announced its air force chief has been sacked, amid a broad shake-up of the country's military hierarchy.

Armed Forces Chief of Staff Ahmed Gaid Salah was to chair a ceremony on Tuesday at which major-general Hamid Boumaiza would assume the role of air force chief, the ministry said.

The event would see Boumaiza "replace major-general Abdelkader Lounes who has been retired," it said in a statement.

The announcement comes a day after Lounes' dismissal was reported by Ennahar TV.

The private channel also reported the sacking of the commander of ground forces, the powerful general Ahcene Tafer, which has not been confirmed by the defence ministry.

Further unconfirmed dismissals came at the start of September, when according to Ennahar the air force chief of staff and the head of the air defence force were fired.

The commander of the national gendarmerie was sacked at the start of July, along with the heads of three out of six military districts.

That followed the president's firing in late June of Abdelghani Hamel, the powerful director general of Algeria's police force.

There have also been unconfirmed media reports of the replacement of the head of the central management of army security and the army's inspector general.

At the start of September, army monthly El Djeich said the military overhaul was a normal change at the top and the new chiefs had been chosen for "their competence" and "merit".

The series of sackings of high-level army figures -- considered king-makers in Algeria -- come just eight months ahead of the country's presidential election.

There is widespread uncertainty over whether the ailing 81-year-old Bouteflika will seek a fifth term in office.