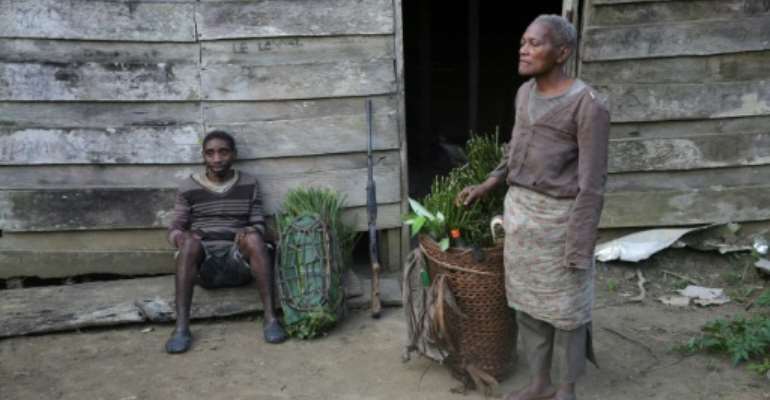 Ebona is one of the ethnic Baka Pygmies in Gabon whose profound knowledge of the forest is their sole source of income. By STEVE JORDAN (AFP)

Just back from the hunt with a choice selection of plants, Ebona feels at home in the endless forest where many Gabonese fear to tread.

"Townsfolk paid me to find these leaves," the Pygmy says, setting the heap down outside his wooden hut, 500 metres (yards) from the rest of Doumassi village in north Gabon.

Ebona's people, the Baka, are held in folklore to be Africa's oldest inhabitants, living today in forests stretching from Gabon and Cameroon inland to the Congos and the Central African Republic.

The dense woods where national borders cease to exist hold no mysteries for the Baka.

"This is our first home," says another villager, who introduces himself as Jean, declining, like the other Pygmies, to divulge their Baka names, used only within the community.

The ethnic Baka Pygmies often have a difficult relationship with their Fang neighbours, the main ethnic group in the area, who tend to treat them like children, leading to complaints by the Baka.

They also struggle to have a legal existence in Gabon, as they find themselves without identity cards, which complicates their lives.

"I am Gabonese, 100 percent, but I don't have an identity card. They promised us that we would have it, but we're still waiting...," says villager Christian, who, like other Baka, wants the same rights as other Gabonese citizens.

"How will I send my children to school?" he asks, in frustration. "How will I vote? How do I get medical care?"

Just weeks before parliamentary elections, the first round of which is planned for October 6 with a second round later next month, electoral officials have made little effort to put Baka adults on the voters' roll.

But many Baka steer well clear of national politics. They say they just want to "survive".

Jean-Baptiste Ondzagha-Ewak works for the Association for Family Mediation (AMF) that seeks to bring mutual understanding to the communities.

The NGO records Baka births to make them official so the children can go to school and receive health care.

For lack of access to health facilities, villager Norbert saw five of his seven children die prematurely, but he joyfully announces that his wife is pregnant once more.

For a long time, the ways of "city people" had a limited impact on communities of hunter-gatherers.

The Baka are still reluctant to go where "cars make a noise", except to buy goods such as "tobacco, soap, alcohol and petrol", according to Christian.

But the need for money has raised problems for Pygmies whose profound knowledge of the forest is their sole source of income.

Seen as one way to help their children go to school, the Baka hire themselves out like "integrated GPS" devices, ready to guide outsiders hundreds of kilometres (miles) into the wild to find game.

Despite their poor relations, the Baka are nevertheless prepared to hunt for their Fang neighbours, too. 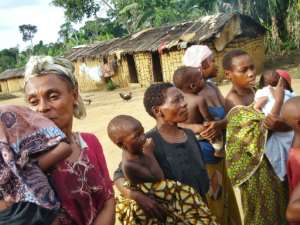 While they tend to treat the Pygmies as "subhuman" purely on account of their short stature, the Fang acknowledge that there is no equal to a Baka hunter's skills.

"At close range, they never miss their shot," said Rigobert, a Fang who sent two Baka off to hunt for him. He gave them a dozen shells and an ancient gun and they returned in the morning with three prey.

Jean was one of the huntsmen. "The army offered to enlist me, but I said 'no'. I have my family, I'm a hunter. That's inside me, why should it change?"

"The only animal I fear is the gorilla, because he reacts like man," Jean added. "He's unpredictable."

International wildlife NGOs hire Baka guides, while urban residents pay them to fetch bushmeat and valued plants. But the Baka are also employed by ivory poachers to track elephants.

"With one cartridge, I can kill him (an elephant). If I hit here, behind the ear, I kill him," boasts Jean, who said he often goes into the forest with poachers from Cameroon.

"The gun and the shells belong to poachers," Jean says, well aware that their activity is outlawed in Gabon.

At the same time, he is the official tracker for an NGO dedicated to protecting the endangered beasts, but Jean has no love of the law.

"I've always eaten elephant, this is our home and that is our meat," he says.

None of the Baka interviewed by AFP approved of the "law of the city" banning elephant hunting, despite the risk the animals may die out if nothing is done to stem the ivory trade.

In a single decade, 80 percent of the elephants have been slaughtered in the Minkebe National Park in northeast Gabon, the country's main forest sanctuary for elephants, according to park officials.

Melvin, one of Doumassi's most respected hunters, objects to what he terms "a bad law", but adds "we're obliged to respect it, we don't want to go to prison".