Why Ekumfi MP Was Nearly Lynched 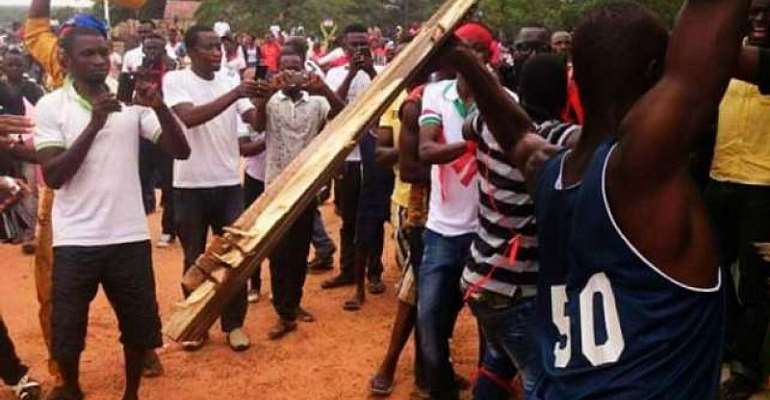 The leader of the irate group, Antwi Aidoo admitted that they were members of the NDC. Some youth of the National Democratic Congress (NDC), have admitted and revealed why they attacked the Member of Parliament for Ekumfi, Francis Kingsley Ato Cudjoe in the Central Region.

In a video that has gone viral on social media over the weekend, a group of young men are seen attempting to break into the MP's V8 vehicle as police officers are also seen calming the situation by preventing the irate youth from getting access to the MP's vehicle.

Some of the angry youth are heard at the background threatening the police officers should they arrest any of them. Others too are heard advising the MP's driver to move the vehicle from the scene to avoid any damage to it by the angry youth.

But the youth said the attack on the Deputy Minister of Fisheries and Aquaculture Development, Francis Ato Cudjoe was in reaction to unfulfilled promises made to the people of the area by the governing New Patriotic Party (NPP) ahead of the 2016 elections.

The leader of the irate group, Antwi Aidoo admitted that they were members of the NDC.

In an interview on Accra FM, he said "The attack was as a result of the numerous unfulfilled promises they made to us. They cannot take us for a ride anymore." However, in a reaction to the attack, the NDC's Constituency Secretary for Ekumfi, Edward Acquah, has denied that the irate youth were NDC members.

He said Ghanaians generally are disappointed and frustrated following the failure of the NPP administration to fulfill their promises, especially in the area of job creation.