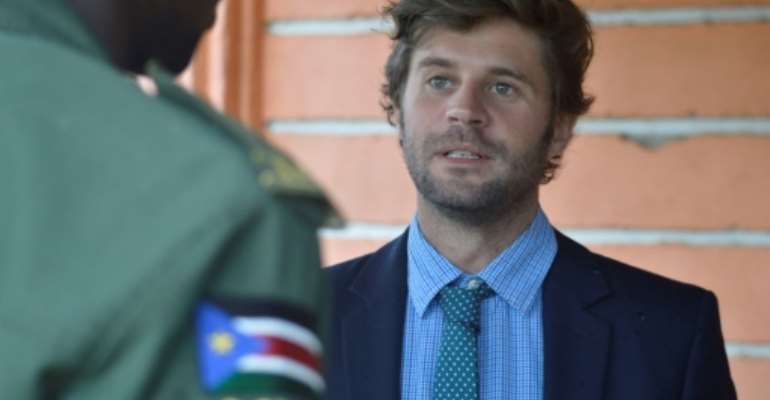 The hotel's British owner, Mike Woodward, said that "50 to 100 armed soldiers" broke into the compound. By Samir BOL (AFP/File)

"The military court has found out that the accused... are guilty for their direct responsibilities in committing these crimes," ruled Judge Knight Baryano Almas, detailing charges of rape, murder, looting and destruction.

One accused was acquitted while another, a military commander accused of overseeing the chilling attack, died in prison last October in what the army said was a "natural death".

Violence erupted in South Sudan's capital when a peace deal between President Salva Kiir and his former deputy Riek Machar collapsed in July 2016.

During the clashes, government forces attacked the Terrain hotel compound housing some 50 employees of foreign organisations.

In his evidence at the start of the trial, the hotel's British owner, Mike Woodward, said that "50 to 100 armed soldiers" broke into the compound.

"One group proceeded straight to the bar and restaurant while another group continued to the residential area," he said.

Woodward listed "the gang rape of at least five international women", the murder of a South Sudanese journalist, the shooting of a US aid worker and "the beating and torture of almost every person in the entire building", including mock executions, among the crimes allegedly committed at his hotel.

Woodward's testimony is supported by reports compiled by the UN and Human Rights Watch.

During the attack the aid workers made multiple appeals for help to nearly UN peacekeepers, which went unanswered.

A special UN investigation found that a lack of leadership in the UN mission -- which has 13,000 uniformed personnel in South Sudan -- culminated in a "chaotic and ineffective response" during the July fighting.

The force's Kenyan commander was sacked.

The court on Thursday ruled that South Sudan's government must pay compensation of $4,000 (3,440 euros) to each rape victim, and over $2 million to Woodward for damage to his property.

Both government troops and rebel forces have been accused of atrocities -- including widespread rape -- in South Sudan's civil war which began in 2013 when Kiir accused Machar of plotting a coup.

The Terrain trial was a rare example of justice in the conflict, which some observers attribute to the presence of foreign victims.