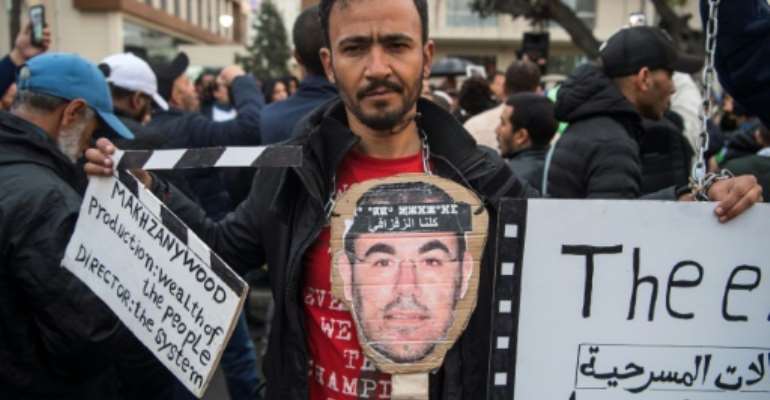 Supporters of Morocco's Al-Hirak al-Shaabi movement hold placards and shout slogans calling for the release of the group's leader Nasser Zefzafi outside the Casablanca Court of Appeals during his trial on October 24, 2017. By FADEL SENNA (AFP)

The jailed leader of a Moroccan protest movement began a hunger strike on Thursday to protest against prison conditions, weeks after he was sentenced to 20 years behind bars, his father said.

Nasser Zefzafi led a protest movement in the marginalised north of Morocco in 2016 and 2017. In June he was handed a 20-year jail term along with three others for "plotting to undermine the security of the state".

"He wants to be taken out of solitary confinement and placed in a dignified cell where he can see and talk to his (jailed) comrades," Zefzafi's father, Ahmed, told AFP on Thursday.

"He has decided to stop eating and drinking water until his demands are met," he said, adding that his son was "determined" to stick by his decision.

He said his son wants the "same rights" as other jailed members of the Al-Hirak al-Shaabi (Popular Movement), which spearheaded the protest in the Rif region.

There was no immediate comment from the authorities at Oukacha prison in Casablanca where Zefzafi is incarcerated.

The 2016 protests began when fisherman Mouhcine Fikri was crushed to death in a rubbish truck, while he was apparently trying to retrieve swordfish seized by authorities as it was caught out of season.

Subsequent unrest in the Rif region, where the marginalised Berber ethnic group is the majority, focused on social issues as demonstrators demanded jobs and development.

Hundreds of people were arrested in connection with the protests but King Mohamed VI has since pardoned nearly 190 of them.

In June, he was among 53 Hirak members sentenced by a Casablanca court -- most of whom were given jail terms of one to five years.