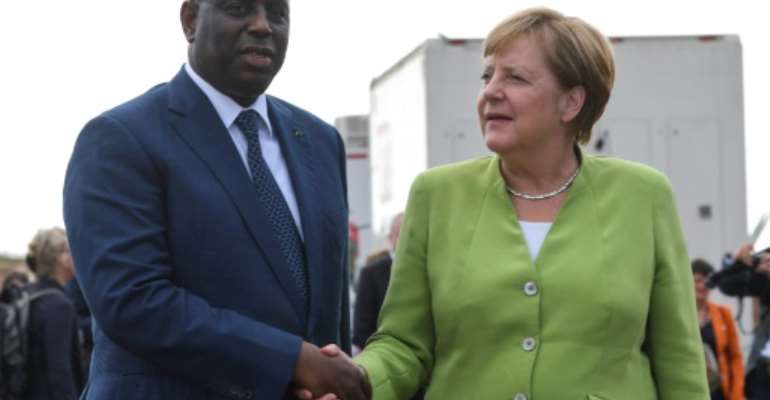 Germany's Chancellor Angela Merkel met by Senegal's President Macky Sall upon her arrival at Diass Airport on the outskirts of Dakar. By SEYLLOU (AFP)

German Chancellor Angela Merkel arrived in Senegal Wednesday, at the start of a West African tour, with Berlin hoping that development of the continent will help stem migration and boost the fight against jihadism.

Signalling that Germany means business, Merkel was accompanied by around a dozen German business leaders.

In Ghana, Merkel plans to visit a start-up hub and in Nigeria she will meet with Ecowas head Jean-Claude Kassi Brou.

On her arrival in Dakar late Wednesday the German leader was greeted by Senegalese president Macky Sall and a guard of honour by dozens of Senegalese marines.

After the playing of the national anthems, the military orchestra belted out two popular German songs, including "Schoene Maid, hast Du heut' fur mich Zeit", which roughly translates to "Beautiful maiden, do you have time for me today?"

"All three countries (on Merkel's agenda) face huge challenges when it comes to economic and social development," a German government official said ahead of her trip.

The three nations are considered important dialogue partners for the German government and there is a need to strengthen and shape their economic growth to benefit all citizens, the official added.

Merkel has placed a strong focus on African diplomacy in recent years, and has called on African countries to do their bit in stemming the flow of migrants to Europe -- an issue over which she faces criticism at home.

British Prime Minister May on Wednesday held talks with Nigerian President Muhammadu Buhari in Abuja on the second leg of her maiden Africa tour, aimed at drumming up post-Brexit trade deals outside the European Union.

Senegal is enjoying economic growth of around seven percent annually, while equally booming Ghana is seen as a haven of stability in the region.

The push for closer economic ties is part of a wider bid to help stabilise African countries in the long run, offering youngsters opportunities at home in the hope of dissuading them from setting off for Europe.

Senegalese, Ghanaians and Nigerians are among the thousands of migrants trying their luck in Europe, even though their chances of winning asylum are slim. In July alone, nearly 950 Nigerians applied for asylum in Germany.

It is important to "stop people from making the illegal and extremely dangerous journey to Europe", the government official said.

Instead, efforts should be focussed on legal methods of entry in Europe, for example for young Africans who study in the EU and then put their education to use at home, it added.