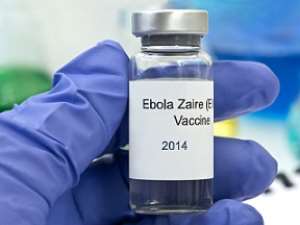 EBOV (Zaire Kikwit strain) stocks were developed at the USAMRIID with virus originally isolated from an infected patient during the 1995 outbreak and passaged in Vero E6 cells.

The stock material for the study was obtained in four passages from the original isolate. This stock has been deemed the national stock for preclinical studies for advanced products.

The stock was made by the Department of Defense Critical Reagents Program under the Joint Program Executive Office for Chemical and Biological Defense.

The virus and future viruses generated under this program have been developed under the Filovirus Animal Non-Clinical Group (FANG), a multiple-agency group including the U.S. Food and Drug Administration, to prepare for validated/regulated efficacy studies.

After the NHPs were moved into containment, acclimated, and connected to the swivel system, the lines were flushed at least once daily with PBS (BD) and locked with heparin (BD) to maintain line functionality.

NHPs were given monkey chow (Harlan), primate treats, fruits, and vegetables for the duration of the study. Before the challenge, NHPs were anesthetized and given a physical examination.

Animals were challenged intramuscularly with a target dose of 1000 PFU/ml diluted from the stock concentration with minimum essential medium (MEM). After the challenge, the animals were returned to their cages and observed until reasonable mobility was recovered.

Plates were then incubated for 7 days at 37°C/5% CO2. After incubation, 2 ml of a 1:1 mixture of the same medium and 4% neutral red stain was added to each well.

After an additional 24 hours of incubation at 37°C/5% CO2, the plaques were counted, and viremia titers were calculated. Viremia analysis was performed on plasma samples with the same methodology.

MB-003 preparation and treatment Treatments consisted of a mixture of three mAbs, and each mAb was equally represented in the treatment mixture. Treatment for each group was set at 16.7 mg/kg per mAb.

The treatment for each specific NHP was determined according to the animal’s weight before the challenge. NHPs were treated via intravenous infusion through the CVC with 60-ml syringes (BD) and syringe pumps (Lomir Biomedical) over about 280 min.

NHPs received MB-003 (50 mg/kg). After the initial positive triggers, all NHPs were treated every 3 days. In total, three in- fusions were given to each NHP.

Animal monitoring and sample collection
NHPs were monitored for changes in health, diet, behavior, and appearance. Samples used for RT-PCR analysis were collected twice per day at 12-hour increments. If anesthesia was required for the collection samples were only collected once daily in the morning.

All blood collections were performed with 1-ml mini collect serum and K3 EDTA plasma tubes (Greiner Bio-One). All sample tubes were centrifuged at 1800g for 10 min, and the resulting material was used or frozen at −80°C for further analysis.

NHP temperatures were monitored remotely via DSI telemetry every 10 min with the corresponding software (DSI). Experiments were conducted under BSL4 containment conditions.

RNA isolation and analysis
Qualitative real-time RT-PCR (rRT-PCR) was used for the detection of Ebola Zaire virus in plasma samples from exposed NHPs. Samples from the NHPs were inactivated with TRI reagent LS (at a ratio of three parts of TRI Reagent LS to one part of plasma).

RNA in each sample was purified with the Qiagen QIAamp Viral RNA Mini Kit. A volume of 70 ml of inactivated plasma was placed onto the column, and samples were eluted in 70 ml of AVE buffer provided by Qiagen.

The eluted RNA was run in triplicate with the USAMRIID DSD EZ1 rRT-PCR pre-EUA Assay Kit on the ABI 7500 Fast Dx instrument. This assay kit uses SuperScript II One-Step rRT-PCR sequence-specific primers and a hydrolyzable probe (TaqMan) against a conserved region of the Ebola Zaire virus.

The PCR cycling conditions were as follows: reverse transcription for 15 min at 50°C, Taq activation for 5 min at 95°C, and 45 cycles of amplification with a denaturation step for 1 s at 95°C and an anneal/extension step for 26 s at 60°C.

The time required from sample receipt to reportable detection was about 3 hours.

Statistics
Survival curves were analyzed with the log-rank Mantel-Cox test. For each test, P < 0.05 was considered statistically significant. Survival data are consistent with proportional hazards.