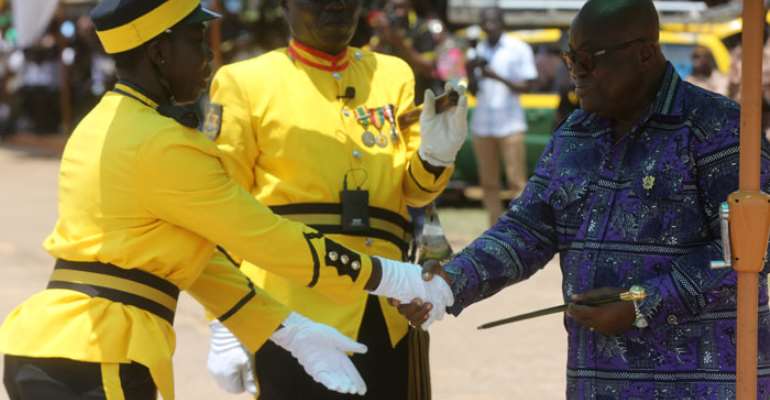 President Akufo-Addo says attempts to get the Special Prosecutor Martin Amidu to back down on certain cases he is investigating will not work.

Delivering the keynote address at the graduation ceremony for Officer Cadet Course Intake 25 of the Ghana Prisons Service at the Prison Officers Training School yesterday, the President said “and to those who are sending chiefs and men of God to the Special Prosecutor to intervene on their behalf to try to dissuade Martin Amidu from conducting his investigations, from the little I know of the man, they are engaged in a fruitless venture.”

It follows revelations by the Special Prosecutor, Martin Amidu that former Minister for Environment, Mahama Ayariga, who is also the incumbent Member of Parliament (MP) for Bawku Central, sent some chiefs and men of God to plead with Mr Amidu to stop investigations into the importation of three second-hand white Toyota Land Cruiser V8 vehicles after refusing to honour an invitation by the Economic and Organized Crime Office (EOCO) over the matter.

He said “under my watch as President of the Republic, the laws of this land will be applied to the letter, and without recourse to the ethnic, religious or political affiliations of the person involved.”

Assurance
The President assured the Director-General of the Ghana Prisons Service that he would assist in helping to improve reformation and rehabilitation in the country's prisons.

He disclosed that the media landscape is replete with many examples of persons, who became hardened in prison and were unable to successfully integrate themselves into the society upon their release, thus perpetrating criminal acts which bring them back to prison.

“It's important that we give them the assurance of a better life after prison by upholding their dignity and human rights. Officers of the service must, at all times, exhibit high level of discipline and professionalism in the discharge of their duties,” he added.

President Akufo-Addo urged the country's security services to jealously guard the peace, security and stability of the nation.

Crime, he said, has become more sophisticated and multi-dimensional, and the country cannot win the war against it if the security agencies engage in needless tussle for supremacy.

“Each one of you has a unique mandate towards the maintenance of peace and security of our country.

Their achievements make them the proud and worthy recipients of the Sword of Honour and the Academic Cane Awards respectively. On behalf of government and the people of Ghana, I say a big Ayekoo to them,” he added.

Concern
The President expressed concern about congestion in the country's prisons and reiterated the commitment of his government to address the problem soon.

According to him, the country's prisons, which were built to accommodate some 9,875 inmates, had been exceeded by some 48 per cent.

“Nsawam Prisons, for example, was built to house 850 persons. Its current occupancy stands at 3,450 persons of which 223 are remand prisoners. Originally, there was no provision for remand prisoners at Nsawam,” he said.

To this end, President Akufo-Addo told the gathering that “we need to do something about these figures, and my government is determined to so.”

Following the successes chalked up under the 'Justice for All'programme, the President indicated that the programme is expanding steadily to cover prisons at Nsawam, Tarkwa, Sekondi, Akuse, Obuasi and Winneba.

He indicated that under the programme, two projects involving the construction of a 2,000-capacity remand prison at Nsawam and expansion of accommodation for staff at the Ankaful Maximum Security Prison had been started and would be completed and operationalised soon.