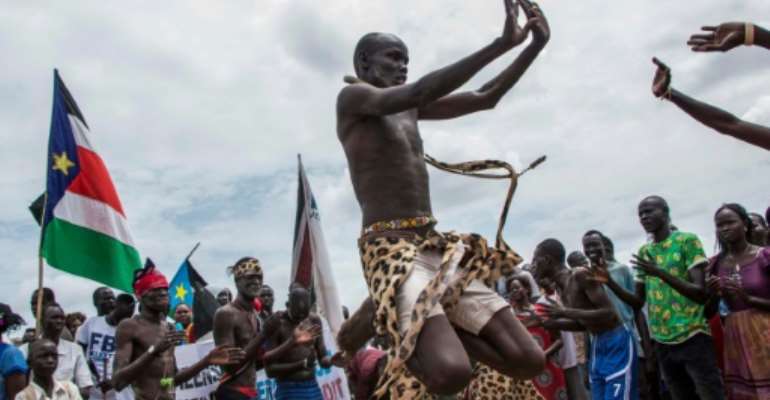 People celebrate as they wait for the arrival of South Sudan's President Salva Kiir in the capital Juba on August 6, 2018, following the signing in neighbouring Sudan of a ceasefire and power sharing agreement. By AKUOT CHOL (AFP)

UN Secretary-General Antonio Guterres on Monday welcomed the signing of a power-sharing deal by South Sudan's leaders and urged them to act quickly to reach a final agreement and end their nearly five-year war.

South Sudan's President Salva Kiir and his arch-foe Riek Machar signed the deal Sunday in Khartoum that will see Machar return to the government as the first of five vice presidents.

The accord is to pave the way for a final peace deal and the formation of a transitional government that will hold power until elections are held.

Guterres hailed the agreement as "an important step" on the path toward reviving a peace deal signed in 2015 that was supposed to end the war.

The UN chief "urges all parties to work in good faith and demonstrate their commitment to fully implement and to finalize the revitalized ARCSS as soon as possible," he said in a statement.

The Agreement on the Resolution of the Conflict in South Sudan (ARCSS) was signed in 2015 to restore peace, but never materialized after Machar was chased out of Juba in an attack by government forces in August 2016.

South Sudan won independence from Sudan in 2011 but descended into war in December 2013 following a power struggle between Kiir and Machar.

Last month, the Security Council slapped an arms embargo and sanctions on two military officials to pile pressure on South Sudan's leaders to turn away from the battleground and seek a diplomatic solution.

The United States, a major backer of South Sudan and top aid donor, has said it has lost patience with the leadership in Juba following a string of failed diplomatic efforts.

Tens of thousands have been killed and nearly four million have been uprooted. Seven million South Sudanese -- more than half of the population -- are in need of food aid, according to the UN.

Chaos during inauguration of Parliament unjustifiable – Bagb...
53 minutes ago

Bagbin declares NPP as Majority with Fomena MP
53 minutes ago