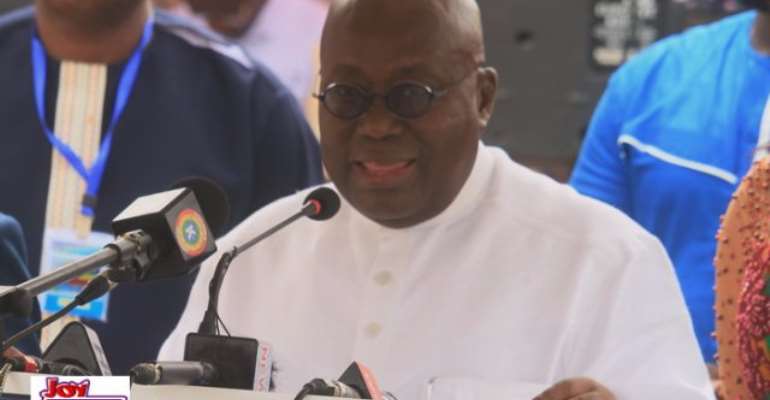 The President, Nana Addo Dankwa Akufo-Addo has advised graduating students of the Ghana Institute of Journalism to undertake their duties in the most acceptable professional manner.

The President expressed worry about what he described as a blatant misreporting of facts in the media and urged the students to pursue outstanding paths in their profession.

Addressing the 12th congregation of the Institute in Accra, President Akufo-Addo said media practitioners in their quest to be the first to break the news and get a punchy headline, end up putting out inaccurate reports.

The president wants this development checked because if left to continue, the public's confidence in the media will be jeopardised and that may lead to anarchy.

“As is unfolding before our very eyes on daily basis, this deliberate misinformation campaigns which in themselves are not new in politics and war have now gained added currency which the proliferation of media channels.

“This is not only the preserve of enemy states in times of war but has also now become a vociferous tool of political actors who aim to win public relations battles by fabricating or twisting facts and churning them out either through traditional media or new media channels as news,” he added.

President Akufo-Addo urged the students to transform the many hours of learning at the Institute and apply it diligently for the benefit of the Ghanaian people.

“You should be the generation of Ghanaian media practitioners that refuse to be either victim or pawn and accept to travel down the path of genuine popular enlightenment which represents the strongest guarantee of our national independence and sovereignty.”

He reiterated his commitment to press freedom stressing the repeal of the Criminal Libel Law and yet to be passed Right to Information Bill (RTI) demonstrates the government’s support for the independence of the media.

He said Ghana’s enviable position as number one country in Africa in the Global Press Freedom Index is no mean feat and must be guarded zealously.

The role of the GIJ in keeping this position is vital, the president said adding that “it has the continuous responsibility of maintaining the quality of professionals trained for the media landscape.”

He added that “I believe we are all of one mind when we say GIJ has done a good job so far and is worthy of commendation.”

The President also announced that government has made GH¢5 million available to help the Institute develop its infrastructure capacity.

This he believes will in providing space for the increased student population which will be seeking admission to the school as a result of the Free SHS programme.

Government through the Ministry of Education, he indicated will also support members of the faculty of the Institute to upgrade themselves.

“Government will certainly do more and change the culture of government’s hitherto unsatisfactory relationship with this Institution,” he pledged.

In all, some 870 students graduated with degrees, diplomas and certificates in communication.