Yendi: Forum On The Right To Information Bill Held 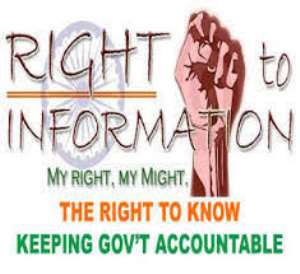 A day's sensitization workshop on Right to Information (RTI) Bill has been held in Yendi.

The effort was to create the needed awareness to ensure that effort being made to pass the bill was expedited.

The event was organized by the Ghana Integrity Initiative (GII) consortium, Ghana Anti-Corruption Coalition (GACC) and SEND-Ghana with funding support from USAID.

Mr Richard Bekyieriya, Programme Coordinator of SEND-Ghana said the essence of the sensitization is to educate citizens on the law making process and create opportunities for them to raise questions and debate relevant issues as regards the bill.

He said with the passage of the bill, the citizen can demand for information from all public institutions should the need arise.

Mr Bekyieriya said in line with the benefits of an RTI law to fight against corruption, the GII Consortium and RTI Coalition in February 2018, launched a joint-campaign (RTI Action Campaign) project dubbed: 'Accountable Democratic Institutions and System Strengthening (ADISS)'.

He said project seeks to ensure a robust and effective legal framework that will prevent and sanction perpetrators of corruption.

Mr Abass Yakubu, the Yendi Municipal Director of Human Rights and Administrative Justice (CHRAJ), said the RTI is a fundamental right and public officials have a duty to make information accessible to the public.

He said the RTI promotes transparency and accountability and it is an important mechanism for ensuring social justice and help in the fight against arbitrariness in the society.

Mr Joseph Makido Azam, Advocay and Legal Advice Centre Officer (ALAC), said the advocacy for the passage of Ghana' s RTI Bill has been ongoing since 2002.

He said efforts to get successive governments to pass the Bill have not yielded the needed results even though progress has been made in terms of reviewing the content of the drafted bill.

He said currently the RTI bill has been read the second time and is at the consideration stage awaiting debate by Parliament.

Mr Abubakari Shani, Executive Director of Action On Voluntary Child Aid, called on participants to spread the information on the need for the passage of the RTI.