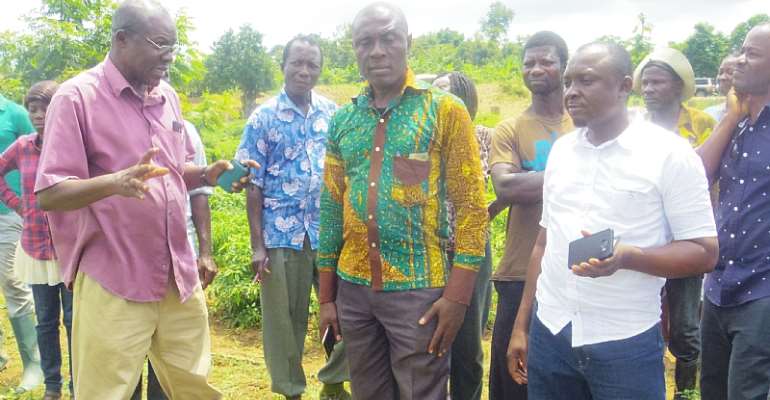 To enable farmers produce quality cherry pepper to meet international market, a 4-Month training workshop on farm management and modernization for Trainer of Trainees is being held for selected farmers and Extension Officers drawn from Six District in the Central Region.

It is mainly on production of the cash crop for export following the recent ban of cherry pepper from Ghana which has been lifted.

The United State Agency for International Development (USAID) sponsored the workshop in conjunction with Plant Protection and Regulatory Service Directorate ( PPRSD) of Ministry of Food and Agriculture (MOFA) at Gomoa Abaasa in the Gomoa Central District.

It is expected that the trainees would also train farmer's groups and individuals on modern method of producing quality cherry pepper for export to boost the local economy.

The participants were expected to know and understand crops studies, nursery management, farm practices among others.

They are also been taught the varieties of cherry pepper and best soils meant for bountiful harvest.

The varieties include Legon 18, Mich 3, Universal Cayen, Agrimat Cayen and others. These are varieties that could produce the needed qualify cherry pepper for international market.

Addressing the participants, the Gomoa Central District Chief Executive, Hon. Benjamin Kojo Otoo encouraged the farmers to take whatever was been taught serious so as to impact the knowledge acquired to their colleagues to enable the district produce quality and enough cherry pepper for export.

He lauded them for responding to the call adding modern method of producing quality cherry pepper was the best option towards poverty alleviation.

" We are in the global world, so we ought to be abreast with the the global market to meet the standard. So it behooves on us to put into practice what we have learnt here to give us the needed results.

International market is wild opened for us. What we have to do is meet the required standard. We can do this this by changing our old way of farming and adopt what we are being taught to better out lives as farmers.

The Gomoa Central District Assembly will continue to support farmers to enhance production of food and cash Crops.

Hon. Benjamin Kojo Otoo disclosed that the Assembly would work hand in hand with Agric Department to carry out its mandate aimed at creating jobs adding that government's policy of Planting for Food and Jobs had come to stay.

The Head of the Trainer of Trainees, Mr. James Kofi Akaste told newsmen that the workshop was to sensitize the farmers on modern method of producing quality cherry pepper for export.

He noted that the International market ban exportation of cherry pepper due to poor quality. So when the ban was about to be lifted in 2018, Ministry of Food and Agriculture (MOFA) thought it wise to enroll a programme that would sensitize farmers and Extension Officers on the modern method of producing quality cherry pepper.

So there was the need for training of farmers and extension officers on how to produce for export.

The participants has been taking through seed to crop approach as well as crop management. It is out hope that by the end of the workshop, they would be able to identity best and safe practices for production of cherry pepper "

Madam Ellen Acquaye, an Agriculture Specialist for improving crop production on behalf of USAID said the programme came about as a results of European Union (EU) ban of cherry pepper and other cash crops for export.

So after the ban was lifted, there was the need for a curriculum to be developed to meet the challenge.

She noted that USAID in conjunction with PPRSD of Ministry of Food and Agriculture set up a pilot project at Gomoa Abaasa to train farmer and extension officers who would also train farmer's groups be abreast with the global trend.

" The curriculum was to train farmers and Agriculture Extension Officers on safe agricultural practices.

We chose Gomoa Abaasa for the pilot project because most of the farmers are into cherry pepper and other cash crops production.

The Presiding Member of the Gomoa Central District Assembly, Mr. Kweku Nyarko Koomson hinted that Members of the Assembly's Agriculture subcommittee would visit farming communities to stress the need for agricultural modernization.