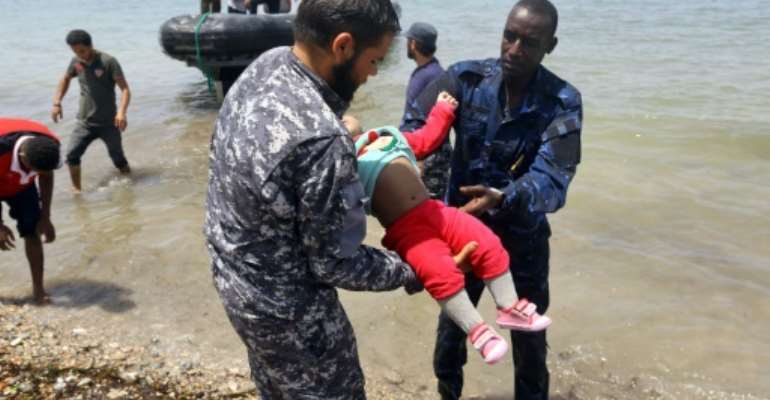 The body of a baby who died in a shipwreck off the coast of Libya is carried ashore in al-Hmidiya, east of the capital Tripoli on June 29, 2018. By Mahmud TURKIA (AFP)

The lifeless bodies of three babies were brought ashore in Libya on Friday, victims of a Mediterranean migrant shipwreck in which survivors say 100 people are still missing.

Around 120 migrants were aboard the inflatable craft when it ran into trouble, according to survivors taken to Al-Hmidiya, east of the capital Tripoli.

Sixteen people were rescued, while the missing included two babies and three children under the age of 12.

Survivors told AFP the boat sank a few hours after its pre-dawn departure from Garaboulli, east of Tripoli, following an explosion on board.

The motor then caught fire and the vessel began taking on water, they said.

The passengers included several Moroccan families, none of whom survived.

"When I saw the number of people on the boat, I refused to get on board, because we had been told that we would be 20 (passengers)," said survivor Amri Swileh, from Yemen.

Showing his bruised arms, the 26-year-old said he was threatened by smugglers and forced onto the boat.

"I lost all of my Yemeni friends who were with me. All five of them are missing," he said.

While there were up to 15 women on board, the 16 rescued passengers were all young men from countries including Gambia, Zambia and Sudan. 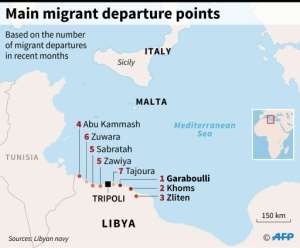 Ranking of Libyan cities used by migrants as jumping-off points for attempts to cross the Mediterranean Sea in recent months. By William ICKES (AFP)

The only bodies recovered were those of the three babies, while the rest of the dead were left at the scene "for lack of resources", a Libyan coastguard employee said.

Salem al-Qadhi, a coastguard captain, said he was shocked when he reached the site of the incident.

"It was horrible to see," he said.

Fishermen had spotted the migrant vessel in difficulty and contacted the Libyan coastguard.

The Libyan branch of the United Nation's migration agency said it was supporting the 16 "traumatised" survivors, noting that there had been further rescue operations off the coast.

An additional 345 migrants had been brought ashore in Tripoli and were receiving humanitarian assistance, the International Organization for Migration (IOM) wrote on Twitter.

Libyan authorities have been involved in the rescue of hundreds of migrants in recent days.

On June 18, five bodies were recovered and more than 100 people were saved after being shipwrecked off the Libyan coast.

Nearly 1,000 migrants were rescued on June 24 from multiple inflatable boats which had run into trouble during perilous bids to cross the Mediterranean to Europe.

The latest shipwreck came after European Union leaders reached a deal aimed at sharing the responsibility for hosting migrants more fairly across the bloc.

The pact reached overnight includes a proposal to set up "disembarkation platforms" outside the EU as a way to reduce the number of people taking the perilous sea journey.

But the forces of Libyan strongman Khalifa Haftar on Friday rejected any foreign military presence in the south of the country to stem migration. 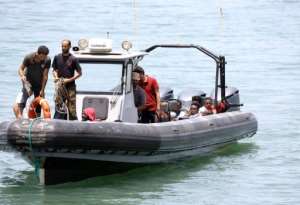 Survivors and victims of a shipwreck are brought ashore in Al-Hmidiya, east of the capital Tripoli on June 29, 2018. By Mahmud TURKIA (AFP)

Haftar heads the self-styled Libyan National Army and supports a parallel government in eastern Libya that challenges the authority of the country's UN-backed unity government in Tripoli.