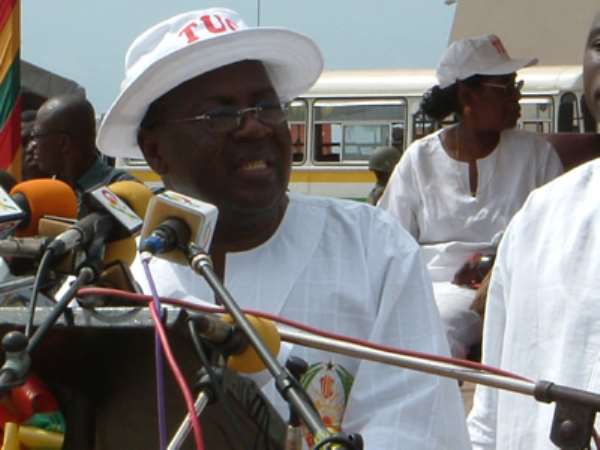 Accra, Sept. 17, GNA- Vice President Alhaji Aliu Mahama observed at the weekend that the degree of moral decline and the extent to which national life was being affected, should be a matter of serious concern to the political and religious leaders. He said due to insensitivity to morality, crimes such as armed robbery, murder, rape and violence had become common place incidents, hence the need for national commitment towards moral excellence to facilitate accelerated progress and development. Alhaji Mahama made the observation at the 11th National Ramadan Conference, held at the Abossey Okai Central Mosque in Accra on the theme: "The Islamic Concept Of Morality And Its Importance In Nation Building". The Vice President who sermonised on morality said: " A careful study of Islam will reveal that morality is so inclusive and covers a greater percentage of Islamic teaching". "Morality in Islam is the dimension of faith which gives expression to the inner most goodness, beauty and purity of the human being who has been chosen and raised to the status of the representative of Allah on earth."
Alhaji Mahama said the progress of any nation depended to a large extent on the degree of human development of its citizens of which morality is a key factor.
He stressed: "Leadership is a critical area of nation building in which morality is of paramount importance. Leadership that is established on a sound moral foundation is bound to inspire hope and confidence and consequently generate the needed loyalty, commitment and dedication to the attainment of collective goals."
Alhaji Mahama expressed the need for leadership to eschew negative tendencies, which represented bad moral conduct that tend to undermine loyalty and obedience and generate indiscipline and rebellion. "Vices like corruption, waste, extravagance constitute some of the moral failures that have reduced many African countries, including ours to a state of poverty and underdevelopment," he said, adding , " The Holy Quran says the world is afflicted with difficulty because of the misconduct of human beings".
He said although sustainable peace and stability was a basic prerequisite for lasting progress and development, it could not be attained in a condition of tension characterised by hate, envy, intolerance, violence, injustice, disrespect for human life and dignity. "Let us be guided by the statement of the Holy Prophet that whoever of you sees something wrong must seek to rectify it by action or deed. If he cannot; let him try to change it by word; if he cannot, let his feelings of disapproval and condemnation intensify and this is the minimal degree of faith."
Sheikh Ibrahim Cudjoe Quaye, Greater Accra Regional Minister asked Muslims to give a positive image of Islam by remaining united in adversity to bring love and peace to humanity.
In apparent response to suicide bombings in Iraq and other parts of the world, he said "No Muslim should kill or terminate life without justification. We all have the right to life and we are all equal," he noted.
Sheikh Nuru Sharabutu, National Chief Imam, asked Muslims to abide by the meaning of the Islam as a religion of peace by co-existing with other Muslim sects and tolerating the religious views of others. The two- day conference, which was attended by Ministers of State, members of the Diplomatic Corps, Muslim chiefs and delegates from the 10 regions agreed to start this year's Ramadan fasting on Tuesday October 4, if the moon, which is key to the religious exercise is sighted on Monday October 3.
Thursday, October 6, automatically becomes the first day of the Ramadan fast if the moon is not sighted as expected. The conference awarded the first Islamic Peace Award to the Vice President, the Regional Minister, whilst the National Imam was awarded for his good leadership.