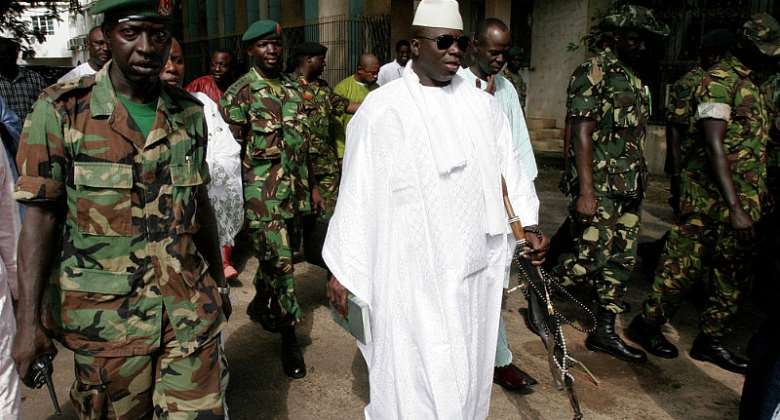 A powerful campaign dubbed Jammeh2JusticeGhana has been launched in Accra, the Ghana capital, calling for prosecution of former Gambian leader, Yahya Jammeh, for the 2005 massacres of 44 innocent Ghanaian migrants in the Gambia, who were on their way to seek greener pastures in Europe and were allegedly mistaken for coup plotters by Jammeh's intelligence. Bringing Jammeh to trial in Ghana would be only a first step to ensure that the former Gambian strongman does not escape the wings of justice.

The Chair of the event was none other than Justice Emile Short, the very effective first Chairperson of the Ghana Commission for Human Rights and Administrative Justice, and former ad litem Judge at the International Criminal Tribunal for Rwanda.

Justice Emile Short, speaking at the Launch of the Jammeh2JusticeGhana Campaign

In fact, the collective effort to seek justice for the Ghanaian victims started as far back as in 2007, when Africa Legal Aid (AFLA), and the Commonwealth Human Rights Initiative Africa Office, established the Gambia Task Force. Other Ghana based groups and individuals later joined.

'God Bless Our Homeland Ghana'
The removal of Jammeh from office and his relocation to Equatorial Guinea paved the way for a re-launch and intensification of the campaign. Human Rights Watch took the lead and is represented by Reed Brody, renowned for the role he played as advocate for the victims of former Chadian leader Hisséne Habré, who was convicted of crimes against humanity, torture, sexual slavery, and sentenced to life on 30 May 2016, by the Extraordinary African Chambers within the Courts of Senegal.

Organizations involved in the Jammeh2JusticeGhana campaign include Trial International, CDD Ghana, and Africa Centre for International Law and Accountability.

Notable among the justice seekers is 37-year old Martin Kyere, the key witness, and the only survivor of the 56-57 West African migrants who were killed. Approximately, they included 44 Ghanaians, 10 Nigerians, One Senegalese, One Ivorian, and One Togolese. Kyere is alive because he was able to free himself from the rope tied around him and the other victims, and jumped out of the pick-up vehicle carrying them to the destination where they were to be executed. He gives a vivid and shocking account of the victims' untold sufferings at the hands of the killers, who have since been identified as the Junglers, a paramilitary death squad who took orders directly from Yahya Jammeh.

Martin Kyere at Accra Cemetery in Ghana where some victims were laid to rest. Photo credit: TheGuardian

Family members of the victims were present for the launch. The spokesperson of the victims' families informed the audience that he was 10 years old when his mother and other family members were called by their head of family to inform them about what had happened to his father.

Also present were a number of Ghanaian personalities, including the Inspector General of Police, David Asante Apeatu, who, as director of the criminal department of the Ghana Police Service had participated in a mission in Senegal and Gambia investigating the killings and disappearances of 'our fellow human beings,' as he so well put it; Nana Oye Lithur, former Minister of Gender, Children, and Social Protection who at the time of the massacres was regional coordinator of the Commonwealth Human Rights Initiative Africa Office; and a representative of the Office of the President of Ghana.

The initiators of the re-launched campaign had earlier briefed the President of Ghana, who incidentally was the Minister for Foreign Affairs when the killings occurred. They reported that the President appeared to take the matter seriously.

Bringing a former President to justice in another country will likely be an uphill battle. Nevertheless, the launch ended on a hopeful note with Justice Emile Short highlighting the jurisdiction options available for Ghana to prosecute Jammeh.

Extradition of Jammeh to Ghana would be required. Justice Short opined:

'Given the evidence that has been compiled, and the gravity of the offenceswhich have been demonstrated by those who have testified to it, I think that a momentum can be gathered to ensure international support for a requestfor extradition of Yahya Jammeh to Ghana to face trial.'

Your comments are most welcome. Click here to comment. Become a fan of Africa Legal Aid on Facebook, connect with us on LinkedIn, follow us on Twitterand invite your friends to join AFLA and its worldwide community of supporters.