PPP Youth Challenged To Claim Ownership Of The Party 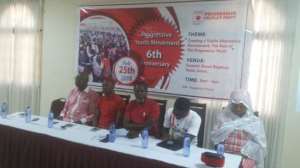 Progressive Youth Movement (PYM), the youth-wing of the Progressive People's Party has celebrated its Sixth Anniversary in Accra, with a call on youth members to claim ownership of it.

Dr Papa Kwesi Nduom, the Founder and Leader of the Progressive People's Party (PPP) who made the call in a live video at the celebration of the Anniversary, said the youth are the leaders and must not wait for the leadership of the party to go to eternity before claiming ownership.

However, he said they must take keen interest in the activities of the party to enable win power in 2020 and beyond.

He said: 'The PPP belongs to you today, not tomorrow and I want you to take it, take this party and you make of it what you want it to become, let the PPP be the party you want it to be. I am hoping that some of you will work from today and come 2020, you will become Members of Parliament as young men and women'.

The PYM was formed on February 25, 2012 as the youth wing of the PPP to promote the cause of the movement of the progressive and independent-minded people, following the declaration of Dr Nduom also known as 'Edwumawurah' on December 28, 2011 to contest the Presidential Race.

The Anniversary celebration was on the theme: 'Creating a Viable Alternative Government; The Role of the Progressive Youth'.

Dr Nii Allotey Brew-Hammond, the National Chairman of the Party observed that government had not created an enabling environment for entrepreneurs to thrive, resulting in unemployment situation in the country and made the youth to flee to the Mediterranean in search of greener pastures.

He said the PPP promise to Ghanaians was to be given four years to facilitate the creation of millions of jobs that will transform the social and economic fabric of the nation.

Mr Emmanuel Osei, the Deputy Director of Research of the Party admonished the leaders and members of the PYM to eschew indiscipline and rather imbibe in them the discipline of PPP.

He charged the youth to be selfless in the party and work hard to promote their vision of winning election 2020 to help the teeming youth.

'The PPP and the PYM will only win power and solve the unemployment problem when we all disabuse our minds that we are 'bystanders' and that some people are the party and they must provide everything for the party', he said.

Mr Murtala Mohammed, the National Secretary of the Party urged the PYM members to take up positions, sacrifice for the party and develop repertoire of songs and endeavour to promote the ideologies of the party to enable it win power to help mother Ghana.

Mr Divine Nkrumah, the National Youth Coordinator urged the youth to rise and defend the party in all its endeavours.

The Anniversary was attended by more than 3000 PYM members across the country.