Teacher Commended After Drawing Computer Screen On Chalkboard To Teach 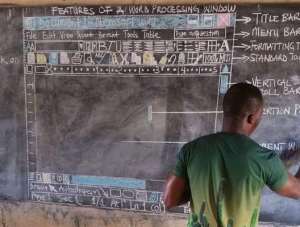 Teaching is not an easy job.
It’s made even harder when tutors do not have the resources they need to do the work they have been assigned to do.

A number of teachers have to improvise to get their pupils a basic understanding of the things they teach them.

One ICT teacher has literally gone back to the drawing board to teach pupils in his class how to use a computer.

In an ideal situation, students would sit behind their computers while the teacher points out the various parts of whichever programme they are currently studying.

Owura Kwadwo and his pupils, however have no such luxury.

Making do with the resources available to him and determined not to let his charges fall behind, the teacher sketched an average Microsoft Word document on the chalkboard.

The parts of the window are labelled, enabling the students to get a fair idea of the various parts of a typical Word document.

The pupils follow suit, drawing their own makeshift computer screens in their books and scribbling down every pointer he gives.

Owura, whose bio notes that he is a former student of Kumasi Academy and currently studies at the University of Education, posted the pictures of the improvised ICT lesson on his Facebook page with the caption “Teaching of ICT in Ghana’s school is very funny. ICT on the board paa. I love ma students so have to do wat will make them understand Wat am teaching.”

The photos, which were posted last Thursday, have since gone viral.

While some Facebookers have praised his ingenuity in the face of the lack of resources, others have expressed dismay at the conditions pupils in rural Ghana have to deal with in their pursuit of knowledge.

Not an isolated case
A number of schools in the country face similar challenges.

Many schools in rural Ghana, including the Gbolo Alzariya English and Arabic Primary school in the Sagnarigu district of the Northern Region are without Information Communication and Technology (ICT) laboratories and tools.

The school's headmistress, Madam Mahama Maria, revealed to Citi News in January that the only laptop used for teaching the pupils has not been functioning since 2015.

According to her, a philanthropist donated the said laptop to the school with a population of 430 students.

“We have an ICT teacher in the school. In the past we used to have a laptop which someone gave to the school to use but it's been spoilt for about two years now,” she said

“It is a big problem for us that we have an ICT teacher in the school and yet there is no laptop for us to use and teach the students.”