Shithole Eeh? Then Listen To This Trashy Trump! Part I 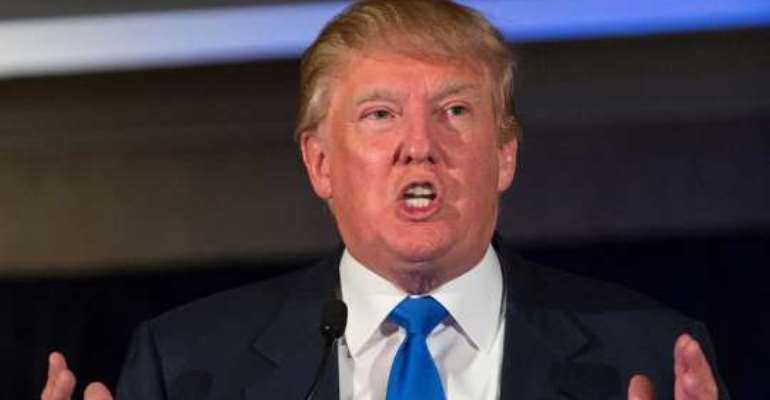 I have always posited that America is not great after all. It is a bully amongst nations. Hers is an overbloated ego that seems to inflate perpetually. The American administrations have always breached the codes of conduct, civility, fairness and justice while they practiced skunky prejudice, racism, and crass superciliousness. Their ideals are those of nakedness, bizarre cigar sex stunts, and profligate promiscuity.

They preach what they do not practice! Their values are measured by how much of a bully one could be, and how daringly sexist a political villain must be; a Donald Trump profanity signature. The USA is a country, which fights anything and everything that does not consent to its dubiousness. Worst in this inhumanity is the most perfidious Donald Trump, who has brought to these chauvinist administrations a new flavour of foolishness.

He sought to coerce Jerusalem and put it in the hands of the invaders of Palestine. He sought to sanction all those countries that voted against his idiocy at the UN. The arrogant Israeli Ambassador in Ghana warned our government not to make such a mistake of voting against Israel ever again. They can shove their egotism where the moon does not shine for all we care!

Donald Trump seems to be the psychotic President most Americans want because he is a true reflection of his population. You know, human beings are the kind whose exuberance about their instincts can pop violently out like jack-in-the-box with the least opportunity.

That perfect opportunity to exhibit crass racism and hatred to Africans and Arabs came on a Trump Silver platter. A gamble magnate with wealth acquired from casinos and jackpots was certainly not going to be more different than his fellow Americans who gambled on him and got all that they deserved….Abject nonsense!

Americans so much love the smell of shit that they cannot hide their urge to be right in the middle of the many #shitholes in Africa and the Middle East! In fact, to be addicted to sniffs of such smell, one must be no better than shit itself. By the way, what are Americans looking for in the shitholes, probing them like the sodomy of the unjust? They seem to seek pleasure in filth, and eroticism in lengths of shit that they wear proudly around their necks like laces and ties to enhance their shitty looks.

Here is an excerpt from my book, “59 Years to Nowhere and Counting…the future is now”

Page 121/122: “A brothel was discovered in Swansea, Wales - UK, where sheep and some rare species of animals were groomed for sex. Sick you say, huh? That was just the tip of the iceberg! Well, it was soon discovered that they had a camouflaged website where sicker freaks of these so-called democratic, developed, and I-know-it-all societies surfed, and made online bookings to practice bestiality, and implement their bizarre caprices. Despicable! That can never be found in Africa, no matter the circumstances.

This freakish behaviour, just like gayism, which started as a taboo, and had since become a humane practice inculcated in all human rights bills, might well be accepted in the near future. Those are places where the most absurd things happen, yet we shed our culture and adopt theirs. Are these the sort of grounds we are preparing for the beloved unborn?Just like LGBT is being imposed on Africa, I won’t be surprised that this flagitious blasphemy would become normalised by Western societies, and forcibly propagated within our societies; I am afraid!

It just does not stop there. In 2015, a married couple in Florida, Tito and Amanda Watts, were arrested for selling “golden tickets to heaven”. Hundreds of people bought into this scam, and the purported tickets were far from golden, of course. The man testified that Jesus Christ gave them to him behind the local KFC (Kentucky Fried Chicken) joint to peddle for the purpose of saving enough money to go on a UFO trip with space Beings to a different planet. So if anyone should be arrested, it must be Jesus because he started the whole mess. The lady said that she had no hand in this, but was just looking on. She corroborated the story of her hubby, and also asked that Jesus Christ be arrested.

Those are the kind of characters roaming the streets of the Super Powers taking up positions in Capitol Hill in the USA, and other seats of government in Europe, wanting to enforce their bizarre ways on Africa. They are not isolated cases of lunacy, but quite rampant across the “continents of the civilised”.

*********** Americans seek to impose on Africans their sick culture of nakedness and animalism to corrupt us even more. Yes we are corrupt here in Africa because we have allowed corrupt fools to rule us. But no more! Enough is enough! That is why the #ShitHolenations are beginning to wake up from their sleep. Ivory Coast voted for an incorruptible President, H.E. AlassaneOuattara; Ghana voted for the incorruptible supersonic President, H.E. Nana Akufo-Addo; SierraLeaonerecently voted for the dynamic George Weah. We are making progress, so Donald Trump can shove his smelly ideals in his shithole. His utterances were just as smelly as the mouth that sputtered out such profanity as “Africans come from Shithole countries. He seriously needs to see a Doctor! He must be forced to submit to the request of over 70 psychiatrists who want to test his mental case!

#Shithole citizens should remain at home. They must put shoulder to bumper in order to turn their #Shitholes into beautiful lawns of roses, and become self-sufficient. Then shitty psychopaths like Donald Trump cannot enforce their will on us for pittance anymore!

Mr US Ambassador in Ghana, we demand an apology from your shithole embassy that seems to condone your shithole president’s imbecility!

It’s such a shame to be American, especially at this time! #OperationBoycottAmericaNow