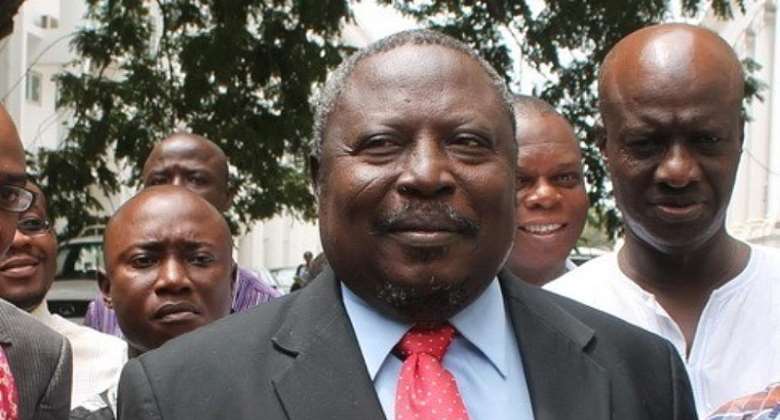 Time they say sweeps everything along and can bring good as well as evil, evil as well as good. At no point in time would this adage ever be appropriately used more than now. The man who wants to hang himself can always be led to the noose. The crow that mimics a sea gull drowns.

Mr. Citizen Vigilante, you trumpeted a misconception that Former President John Dramani Mahama was running a Family and Friends government that was also corrupt, right? A reason like a rabies-infected dog who just saw a ghost at dawn, you were consistently up in arms against his regime. You advocated for a regime change and said the only way to fight corruption was to boot out the looter-JDM as you preferred to call him then. You rained all manner of unsubstantiated allegations against the Grandson of Jakpa. Today the NDC is in opposition by kind courtesy of your likes! Congratulations Mr. Citizen Vigilante.

I was tempted at the beginning to believe the lies you were spewing because I thought all Bawku trained politicians are honest people. I never imagined that we have black sheep among the Bawku politicians let alone accept that you are one of such lousy wops. You said Nana Addo Dankwa Akufo-Addo was incorruptible and that he was much more competent and decisive than Former President John Dramani Mahama for which matter Ghanaians should vote for him. Ghanaians thought you were genuine and fell for your tricks, and what really happened after voting the so-called incorruptible and competent team?

Nana Addo hired blumbers who are goofing all over and doing more damage than blind horses in empty barns. His second in command, Bawumia, has gone into hypnosis. He lies like no body's business. It is difficult to detect Dr. Bawumia's lies. No blinking, blushing, stammering and gulping what so ever. He is a born liar, with a pathological compulsion to subvert the truth. We have now gotten to a point where if he should greet you good morning, you have to pause to check the time before responding because you might be responding to good morning in the evening. That is the wahala you and your likes have rogued Ghanaians with.

Mr. Citizen Vigilante, have you thought of the posture and looting attitude of the Chief Priest of corruption and his 110 overpaid tap dancers? All anti-corruption crusaders and moral high grounds advocates have suddenly become passive spectators, following the senile like zombies in the famous Fela Kuti's song. No one is talking and nothing is moving with regards to that. The only thing moving is the gutter rats as I prefer to call them and they ain't paying attention to nuttin. They are busy eating out the "garbage cans".

Mr. Citizen Vigilante, I used to respect you so much and I simply don't think I should be nasty to you in this manner but you see, I love men who use their brains and I have the highest respect for them but after all else had failed to convince a recalcitrant antagonist like you to speak out against the ills in our society under this overcrowded real family and friends commission being called government, this should be the outcome. You are finally in my rogue's gallery.

Mr. Citizen Vigilante, I have few questions for you and I hope you take it kindly. Today in Ghana; expatriates are charged fees ranging from $25,000 to $100,000 to sit and dine with the President. Having you heard this? The unaware President is deceiving the public that he knows nothing about it as usual of him. Then interestingly enough, Carlos Ahenkorah, the Deputy Minister of Trade and Industry, who signed the demand letter revealed on Neat FM that the whole deal was discussed at the Presidency and that the bribes were transferred from the Ministry of Trade and Industry accounts to a Flagstaff House account. This is a serious contradiction that calls for a serious interrogation. The unaware President's query to Alan Kyeremanteng was another cosmetic exercise by the government to project the obviously corrupt Nana Akufo-Addo as blameless.

The flagstaff house is now not only a monument of corruption, but a family, friends, associates and concubines’ commission as well as a brothel. Didn't you hear Diamond Appiah, one of the patronizers recently heckling and nagging one of her colleague patronizers?

You claimed you are an anti-corruption crusader, doesn't the avarice, acquisitiveness, cupity, rapacious propensity of the Nana Akufo-Addo- Mahamudu Bawumia government give you nightmares? These dudes are just weak overlords who are just seeking the aggrandizement of themselves, their families, friends, associates and concubines who are quicker to despoil their subjects than govern, can't you see? Awurade Yakubu, judgment day will be so interesting. If I should arrive in Heaven earlier, I would plead with the angels at the gate to permit me stand by the gate and see how people like you would be judged.

Mr. Citizen Vigilante, you are currently too pusillanimous. The chief priest of corruption; Nana Akufo-Addo, is grindingly cruel to those who stand in his way. He is very ruthless and glorying in bloodshed. He has and is still busy dismantling democratic institutions by closing down media stations that are critical of his regime, buying independent TV, Radio and newspaper outlets and clamping down on opposition activities. He has ever since he became President dismissed several public and civil service workers. He has even extended his encroachment to the independent Electoral Commission of Ghana. Ghana is currently in a "Gray zone", can't you see?

Where did your likes jet off to?
The last time I heard you spoke, you said Mrs. Charlotte Osei is incompetent and that she was put at the EC to help NDC rig the elections. Really? And you think you are okay? Apart from the cola nuts you've over consumed, what else do you secretly consume in extreme quantity? Liquor? Who won the 2016 elections? Was it disputed? Jealousy is shame. Mrs. Charlotte Osei is currently facing a 'Rambo' impeachment committee and her crime is that she is exposing the Cartels at the EC. You are an anti-corruption crusader, won't you stand up for her?

Mr. Martin Amidu, Alfred Obeng Boateng of the BUSTED BOSTING BOST BOSS fame sold 5million litres of contaminated fuel to his own unregistered company which was unlicensed. Did you not hear it? Or because John Dramani Mahama is not the president it isn't corruption?

Boakye Agyarko bribed the parliamentary appointment committee with GHS150,000 to qualify him for his vetting, Hon. Mahama Ayariga your Bawku brother cried out to the public and he was nearly crucified, didn't you hear that?

GHS20million was squandered in the Ghana @60 celebration. We were told the money was coming from corporate Ghana; till date we don't know who they are. We don't know who contributed what and where is its source of funding? We still don’t know how much was donated for the occasion. We were later told that GHȻ5Million was taken from the district assembly common fund for the 2 hour ceremony. Surprisingly enough, the Ghana @60 organizing committee haven’t been able to render proper accounts to Ghanaians. You've seen nothing wrong with that? Or have you suddenly lost your citizen vigilante oil in your blood?

What about the fact that our 110 ministers couldn't fight common army worms. I'm not a doomsayer but the reality is that famine is smiling at us. Are you okay with this super incompetence?

Aaahhhaaaa, where are your good friends? I mean the wise men and the high moral grounds advocate? I mean Martey, Buckler, Otabil, the old chameleon el tal. The God of John Dramani Mahama is really a living God. The handsome Grandson of Jakpa have been vindicated rather too early than I expected. All these crazy guys have suddenly become passive spectators. They've all now succumbed to the whims and caprices of the senile emperor. If cockroaches decide to dance in fire, death is inevitable. Is it true that you receive brown envelope from the Flagstaff House every weekend? And that the sanitation ambassador also receives some? Could it be the reason why you are both quite? Lowliest bootlickers? Lol Lol Lol. There is something behind your pusillanimous posture.

After destroying your own brother and friends, do you still believe in the leadership of the NDC. Have you done the corruption comparison between the one year of the NPP administration against the 8 years of the NDC?

Is John Dramani Mahama vindicated now?
Will you apologise to the NDC fraternity?
Anyway, JDM God has forgiven you. I hope you've now seen the truth and the light? All that glitters is not gold.

You and the sanitation ambassador should stop the Fela Kuti's follow follow. Have you forgotten that famous song? It depicts your current posture, I will kindly make it available to you. Here you have it!

Fela Kuti:Zombie
Zombie no go go unless you tell 'em to go (zombie)

Zombie no go stop unless you tell 'em to stop (zombie)

Zombie no go turn unless you tell 'em to turn (zombie)

Zombie no go think unless you tell 'em to think (zombie)