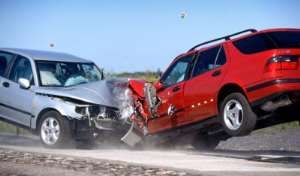 The number of persons killed through reported road accidents in the Upper West Region recorded a marginal decrease from 54 cases in 2016 to 52 cases in 2017.

The region also saw a reduction in all categories of accidents in the period under review, according to statistics from the National Road Safety Commission (NRSC).

Mr. Mohammed Abdul-Samad, the Upper West Regional Manager of the NRSC disclosed this to the media in Wa.

According to the statistics presented by Mr Abdul-Samad the total number of fatal cases in 2016 stood at 48, which reduced marginally to 45 cases in 2017 with numerous serious cases also decreasing from 72 in 2016 to 50 cases in 2017.

The total number of minor cases reduced from 39 in 2016 to 36 cases in 2017 while pedestrian knockdown also reduced from 30 to 11 cases respectively.

Mr. Abdul-Samad said the theme for the year: 'One death is too many, let's change our behaviour on the road,' brought a lot of impact for the region and commended the media for the support in helping to educate the public about road safety.

Despite the reduction in the statistics, he said, the region encountered some road safety challenges in 2016 and that included wrongful parking, congestion due to increase in the number of motor bikes, excessive speeding and use of hard drugs by riders.

Others are refusal by tricycle riders to wear crash helmet, overloading, interference with law enforcement agents, use of mobile phone while driving/riding, poorly maintained roads, presence of many hazards on the roads and indiscipline on the part of staff from security and safety departments in the region.

The rest are the use of lorry tires, blocks, drums and wood logs among others in place of line markings/signings; lack of logistics for the emergency response departments such as the ambulance service and the increasing number of illegal speed rams.

Mr. Abdul-Samad said with enhanced collaboration with all stakeholders some successes were however chalked in 2017.

This include minimal interference with law enforcement on road traffic regulations, increase in crash helmet usage and involvement of religious and opinion leaders in road safety education as well as removal of majority of the road hazards.

He advised motorists to look out for pedestrians when driving in the city centre to avoid knock downs.