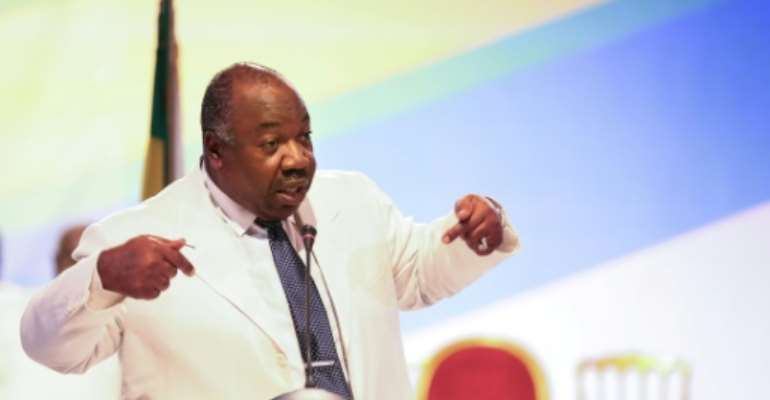 Gabon's President Ali Bongo has ruled the country of some two million since his father Omar Bongo, who took office in 1967, died in 2009 after 41 years in power. By Steve JORDAN (AFP/File)

Gabon's President Ali Bongo vowed "radical change in governance" in the coming year and pledged to foster social cohesion among his citizens in his televised end-of-year speech on Sunday.

"I am determined to do everything possible to strengthen our unity, regain our cohesion," he said. "Cohesion is my ambition for Gabon".

"I intend to implement radical change in governance, which will be based on a fundamentally different approach," he added, describing measures of "immediate impact" he wants to put forward.

Some of them include a temporary exemption from social security contributions for all net job creation, free delivery fees, building wells with water pumps in villages and improving education conditions.

Gabon has large oil, mineral and tropical timber resources, and its per-capita national income is four times greater than that of most sub-Saharan nations.

But about a third of its population of 1.8 million still live below the poverty line -- the result, say specialists, of inequality, poor governance and corruption.

Bongo has ruled the country of some two million since his father Omar Bongo, who took office in 1967, died in 2009 after 41 years in power.

But the country has been in crisis since August 2016, following Bongo's re-election in which he defeated opposition leader Jean Ping by just a few thousand votes.

Ping, a 74-year-old career diplomat, accused the administration of electoral fraud and maintains he was the winner of the poll, in defiance of Gabon's Constitutional Court, which upheld Bongo's victory.

Violence broke out days after the vote, and opposition figures say more than 50 people were killed in clashes. The official toll was only three dead.

Bongo insisted Sunday that "legislative elections will be organised" -- they are due before the end of April 2018 -- because "in a democracy, competition takes place not in the streets, but at the ballot box, of which we must always respect the verdict".

Bongo acknowledged that citizens "are not satisfied with their administration" and invited them to "express" themselves by voting, saying he wanted to "build a society of the meritocracy".