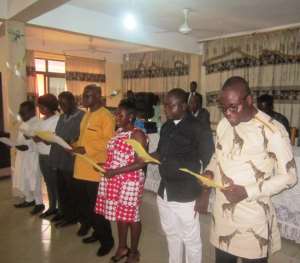 The Brong Ahafo branch of the Ghana Journalists Association (GJA) is looking forward to increase its membership.

In a speech delivered at the swearing-in of the newly-elected regional executives on Friday, December 15, 2017, Brong-Ahafo Regional Chairman of the GJA, Larry Paa Kwesi Moses said it is the priority of the association to increase its membership from next year.

“It is very sad to note that despite the proliferation of the media in the region, the regional branch of the association has only 31 members, which I strongly believe, is not the best and I am entreating those who are not members to register for their own good.

“It’s the priority of the association to increase its membership, and from next year, my administration is going to intensify membership drive in the various districts and Municipalities in the region to convince media practitioners who are not members on the need for them to join the association,” he said.

He added that a lot of benefits are there to be grab as the association under the presidency of Dr. Roland Affail Monney has signed memoranda of understanding with some development partners who will from 2018 sponsor deserving members to undertake top up courses both at home and abroad.

The Brong Ahafo Regional Chairman of GJA also called on Journalists to endeavour to demonstrate a high sense of professionalism and civility in their reportage.

He concluded by calling on members to bury their differences, forge ahead in unity and help identify and address challenges that confront the association.