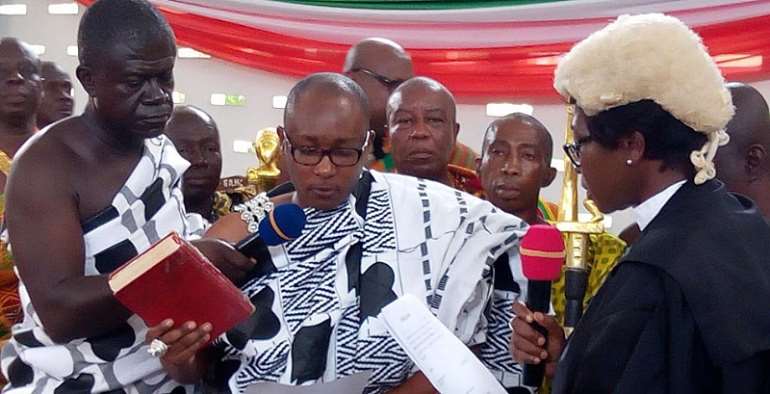 Daasebre Akuamoah Boateng Agyapong II, Omanhene of Kwahu Traditional Area in the Eastern Region, has been inducted into the Eastern Regional House of Chiefs, as the 16th member at a ceremony held in Koforidua on Wednesday.

During the colourful ceremony, the President of the Eastern Regional House of Chiefs, Osagyefuo Amoatia Ofori Panin, said Daasebre Akuamoah Boateng Agyapong had been accepted into the house.

Daasebre Akuamoah Boateng Agyapong took the official oath, the oaths of secrecy and allegiance and the judicial oath, which were administered by the Koforidua High Court Judge, Mrs. Justice Cecelia Naa Shormey Davis.

Osagyefuo Amoatia Ofori Panin called on him to use his expertise to bring the people of the Kwahu Traditional Area together to assist in the socio-economic development of the area.

“On behalf of the Eastern Regional House of Chiefs, I, the President of the house, have accepted you into our fold with both hands and urge you to continue to unite your people in order to bring the needed development and you must also contribute meaningfully to further uplift this august house by discharging all your responsibilities,” the Akim Abuakwa Overlord said.

“We hope your contributions as a new member will be meaningful to enhance the activities of the house.”

According to Okyenhene, even though the number of cases pending before the Judicial Committee of the house had reduced significantly, there was the need to work hard to clear the backlog.

Kwahumanhene's Reaction
The Kwahumanhene, on his part, expressed appreciation to the house and disclosed that he would show commitment to the work of the house to ensure progress.

“The chieftaincy institution is a noble one, but if we fail to go by the laid down procedures of enstooling chiefs and allow self-seeking individuals, who might not have the sanctity of the institution at heart to infiltrate our camps, we might be doing a great disservice to this noble institution,” he said.

The minister admitted that 2017 has been challenging for Regional Security Council (REGSEC) largely due to illegal mining, chieftaincy disputes, illegal mining and sand winning.

He reiterated government's effort at resolving the dispute between Fulani herdsmen and farmers in the Kwahu area.