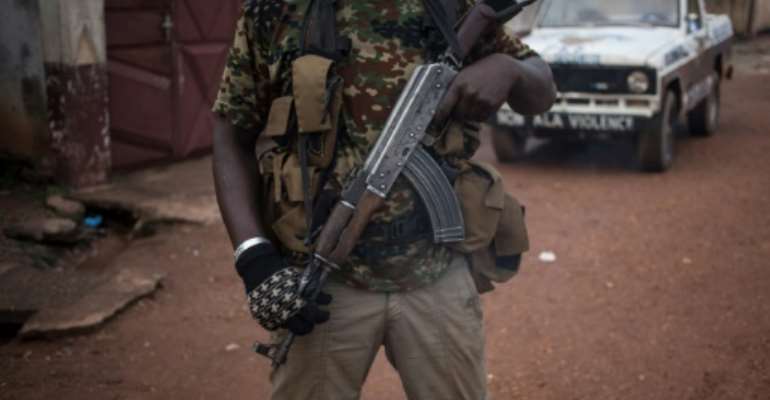 An armed militiaman stands guard at the entrance of the headquarters of the Muslim "self-defence force" group of the PK5 majority Muslim district of Bangui, capital of the Central African Republic, on November 15, 2017. By Florent VERGNES (AFP/File)

Plans by Central African Republic's beleaguered government to reassert control in the north of the country were in difficulties on Monday after clashes marred the return of the state's top representative to a key city.

Colonel Augustin Tombou was formally installed on Saturday as prefect in the town of Kaga-Bandoro -- a politically important step in the strategy to restore state authority in strife-torn provinces.

But sources reported a surge of violence, including mortar rounds fired against UN peacekeepers, gunfire targeting a camp for displaced people and a grenade that was thrown during Tombou's induction ceremony.

Tombou's residence was "partially destroyed" and the prefecture itself was burned down, Jean-Serge Bokassa, minister of territorial decentralisation and administration, told AFP by phone on Monday.

The prefect has been taken to a secure location but does not have the means to exercise his duties, he said.

"We are looking at urgent steps for enabling the prefect's proper deployment," he said.

A vehicle owned by an aid organisation was carjacked by armed men, and another was looted, a source with an NGO in the capital Bangui said.

"What worries us is that if this situation continues, aid workers will have to pull out once more," the source said, referring to a wave of attacks on NGOs.

A member of one group was killed in the early morning, triggering a cycle of reprisals.

The PK5 neighbouhood has often been at the heart of tensions in the relatively calm Central African capital.

One of the poorest countries in the world, CAR has been riven by conflict between nominally Muslim and Christian militias, which started after the 2013 overthrow of leader Francois Bozize.

Outside of Bangui, most of the rest of the country is in the hands of militia groups, who fight over resources such as diamonds and cattle.

More than three quarters of the country's 4.7 million inhabitants live in extreme poverty, according to the World Bank.

The country is classed last -- in 188th place -- on the Human Development Index of the UN Development Programme.

The latest clashes took place in an area dominated by two armed groups -- the Popular Front for the Rebirth of Central Africa (FPRC) and the Movement for Peace in Central Africa (MPC).

Both are offshoots of the pro-Muslim Seleka rebel alliance, which overthrew Bozize and was forced out in turn by international military intervention.

"We do not accept prefects who are military," said Fadoul Bachar of the FPRC via the messaging application Whatsapp. "If they are civilians, no problem, if they are military, we will oppose them fiercely."

Tombou, who was appointed in August, is one of eight military figures among the 16 named by the government.