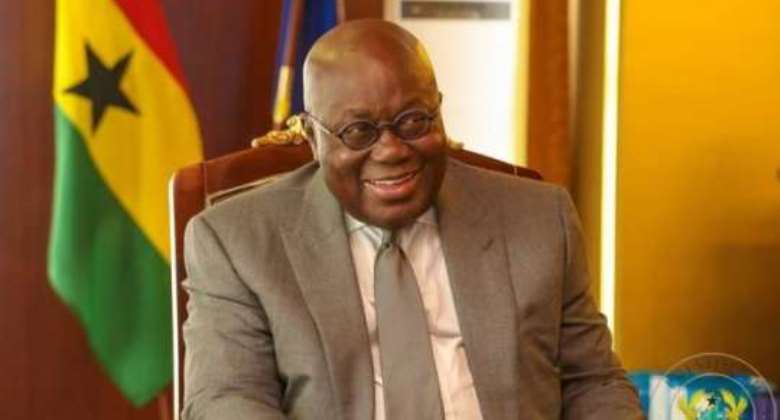 President Nana Addo Dankwa Akufo-Addo on Tuesday received the credentials of four Envoys from Liberia, Brazil, Spain and Sweden at the Flagstaff House in Accra.

Receiving the credentials at separate ceremonies, the President restated governments position of seeking mutually beneficial trade and investment relations with its partners and not aid.

Dependence on foreign aid, and donor support, President Akufo-Addo noted, did not seem to accelerate economic growth in developing countries, saying, "we need to engage the rest of the world on partnerships that encourages self sufficiency towards development."

'it is time that we wean ourselves off dependence, 60 years after independence, we can't continue going around cup in hand, we should be able to do things for ourselves, ' he emphasized

President Akufo-Addo, on receiving the Brazilian ambassador, recounted the strong bonds that exist between the two countries especially in the area of sports.

He expressed appreciation to the government and people of Brazil for the support it was providing Ghana in the area of agriculture and road construction.

'We want to emulate your country to position ourselves to take advantage of the opportunities that present themselves,' the President stressed.

He recalled the efforts of his predecessor, President Agyekum Kufour in setting the building blocks for bilateral relations between the two countries, adding that, 'its our turn to build on them', and encouraged Brazilian companies to take advantage of the thriving business environment to invest in Ghana .

'We want to encourage Brazilian companies to come and build their businesses in Ghana', he said.

On her part, Ms de Luna was optimistic that the strong ties that had existed between the two countries over the years would be further strengthened.

She praised Ghana's resolve to build her economy beyond aid, and pledged her commitment to drive Brazilian investments to Ghana as well as increase trade volumes between the two countries to spur development in the country.

Receiving the credentials of Liberia's Ambassador to Ghana, the President said the relations between Ghana and Liberia predated the independence era and that the people of Ghana had been involved in the Liberia post-civil war peace process.

He expressed the hope that the current transition processes would be smooth to ensure that the path of democratic growth and progress would be sustained in that country.

Ms Kennedy on her part congratulated the President for his preferment by the African Union (AU) as its Champion for Gender and Development Initiative because of his diligence in promoting gender parity and the socio-economic development of women and girls on the continent.

'It was, therefore, of no surprise that your friend and sister, Her Excellency Ellen Johnson Sirleaf of Liberia and Africa's first female Head of State, was compelled to be present at your side when you officially launched the Gender and Development Initiative for Africa.'

When the Spanish Ambassador to Ghana, Alicio Rico Del Pulgar, presented her credentials, President Nana Akufo-Addo expressed solidarity with the people of Spain over recent calls for secession by a part of that country.

He was hopeful that they would find a constitutional solution to that development in order to ensure the social and political cohesion the country had enjoyed over the years was not disturbed.

Ms Del Pulgar, on the other hand said her tenure had come at a time when Ghana exuded more than ever, the vigour and dynamism of a country that knew her destiny and wants it to be entirely in her own hands.

She said there was a new reality in Ghana that invites the rest of the world to look upon Ghana with renewed confidence and admiration.

'The structural reforms and the policies being implemented in the framework of the Ghana Beyond Aid agenda, will pave way for a modern economy with solid productive capacity and good governance,' she said, adding that, Spain considered Ghana a strategic partner and would "accompany Ghana in this new period'.

On Ghana-Sweden relations, President Akufo-Addo said though relations between the two nations had been strong over the years, it could be made better.

He told Mrs Ultvedt that the focus of the government was about creating the enabling environment for the private sector to play the frontal role in the transformation of the economy from taxation-based to an industry-based one.

He said Sweden, with its democratic credentials, was an attractive model for Ghana, stressing the need to identify new areas of co-operation that would further enhance relations between the two countries to a new level.