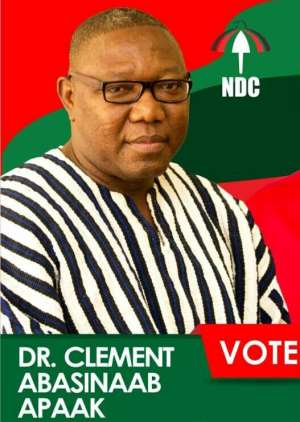 24th November, 2017 By: Analimbey, A. Chris The Member of Parliament for Builsa South, Hon. Dr. Clement Apaak has refuted claims by the Minister for Roads and Highways, Hon. Akwasi Amoako-Atta to the effect that roads in the Builsa South District are in a “fair condition.”

Dr. Apaak was reacting to an answer to a question he asked the Roads and Highways Minister when he appeared before Parliament on Friday, 24th November 2017 to update the house on developments pertaining to the ministry.

Hon. Apaak wanted to know from the minister “when the construction of the following roads (in the Builsa South District) will start.

However, in answering the questions, Hon. Amoako-Atta said “Mr. Speaker, I will be dealing with a background starting with Fumbisi Kanjaga feeder road. Fumbisi Kanjaga road is captured in the department of feeder roads database as Gbedema, Kanjaga, Fumbisi feeder road. It is 17.4km gravel surface road located in the Builsa south district of the Upper East Region. It is an engineered feeder road with a fair to a poor surface condition.”

According to the Minister, “...the entire 17.4km road was awarded for rehabilitation on 6th February 2015. Work commenced on 13th may, 2015 and was expected to be completed by 12th November the following year (2016)”. Adding that “the contractual completion period has since elapsed. The progress of work as at 30th September 2017 is projected at 60%.”

This, nonetheless, did not go down well with the MP for the area, Hon. Clement Apaak compelling him to stand on his feet for a follow-up question.

“Thank you, Mr. Speaker. In the minister’s response, he makes references to the two roads in question as ‘fair to poor’ service condition. Mr. Speaker, as a member of parliament for the Builsa South constituency, I state emphatically that the roads are not fair, they are in poor conditions. Giving this, would the minister consider some immediate remedial measures to ensure that the roads are motorable while we wait to see to the completion of the roads as captured in the contract awarded to the various contractors.”

The Minister in a defense of his earlier position indicated the roads are not that poor as alluded by the MP for the area, adding that one, however, needed a technical eye to determine which part of the roads are fair and which ones are poor.

“Mr. Speaker, I appreciate my colleagues’ equal appreciation of the road, but I want to maintain that in giving the condition mix of any particular road, it could either be good, fair, or poor. And particularly between fair and poor, it could be a thin line and you need to have a technical eye to determine which is fair and which is poor. I want to assure you that it’s not all poor, part of it is fair.”

Hon. Amoako-Atta also stated that “the contractor has been served with two warning letters to expedite action or face termination of the contract. However, the contractor is citing excessive rainfall and employer undue delay in paying for work done as the cause for the slow pace of work.”

With regards to the second question concerning the Fumbisi to Uwasi road, the Minister said “Mr. Speaker, the Fumbisi, Uwasi feeder road is a 10km gravel surface road, with fair to poor surface condition. It is located in the Builsa south district of the Upper East Region. The current program is that this feeder was severely affected by floods during the 2015/2016 rainfall season.”

The Minister was, however, quick to add that the “Fumbisi, Uwasi feeder road is not under contract now.”

Notwithstanding, “Engineering design service has been carried out on road to identify and determine the appropriate interventions needed to install sections affected by the flood. An estimate for the execution of the interventions have been prepared and will be implemented when funds become available.