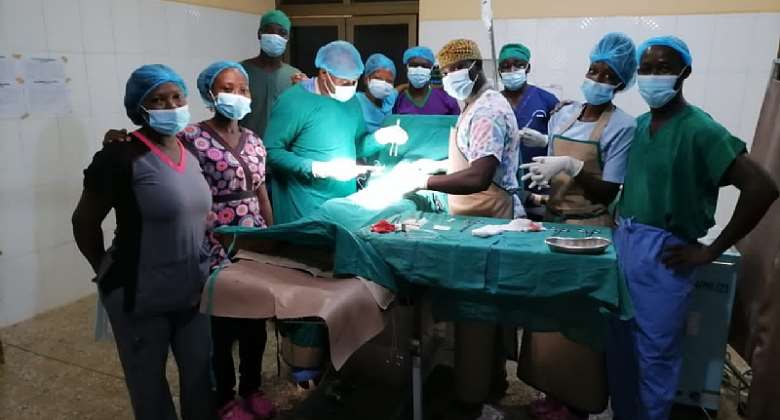 Good health is essential to sustainable development; thus, it is not surprising that universal health coverage is very integral to achieving SDG3 of the UN by 2030.

In line with this, Team of Hope (ToP), a non-governmental organization based in the Upper East Region has successfully organized its annual surgical mission for the people of Buluk and its environs in the Region.

The exercise, which commenced on the 6th of June and ended on the 11th of June, 2022 was led by the executive director and founder of Team of Hope, Dr. Benjamin Akingkang and supported by other medical professionals.

The Team of Hope (ToH), founded in October 2016, is a non-profit organization incorporated in Ghana to, among others, mobilize collective action toward responding to the health needs of people in impoverished parts of northern Ghana.

Since its inception, the organization has provided varied free health services, including free medical screening and operations to hundreds of patients in the northern part of Ghana.

The organization’s June 2022 report indicated that “89 people ranging between ages 1 to 90 years old, were operated on with 57 being males and 32 females.”

In terms of case definition, the report indicated that “27 people came in with hernias, 16 with hydroceles, lipomas, ganglions, lumps, and other body masses, making 31. Others include 1 with breast tumours, 1 with abdominal trauma, 3 with uterine complications including cervical cancers, 7 with haemorrhoids, 3 with fibroids, and 1 case of congenital malformation.”

The Medical Director of the Builsa North district Hospital and his team supported the Team of Hope in carrying out their program.

According to the report, “no casualty of any form was recorded preoperatively, intraoperatively or postoperatively.”

The team expressed gratitude to the Medical Director and Management of the Builsa North Municipal Hospital and individuals who have contributed to the success of the team’s mission.

ToH called on all well-meaning citizens of the Builsa land and beyond to support the organization to enable them to continue their yearly outreach program.

My loyalty towards NPP remained intact despite being sidelin...
13 minutes ago