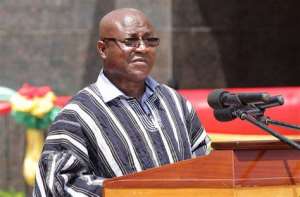 The Minister for Parliamentary Affairs and Majority Leader of Ghana’s Parliament, Mr. Osei Kyei Mensah-Bonsu, has assured Arise Ghana Demonstrators that Parliament would do whatever it can to ensure that concerns presented to the legislature are addressed.

Mr. Kyei Mensah-Bonsu made the observation at the forecourt of Parliament on Wednesday, 29th June 2022, when pressure group, Arise Ghana presented a petition to the house.

Arise Ghana commenced a two-day demonstration in the capital to compel the government to address the high cost of living in the country.

Mr. Monah also entreated parliament to use its power to compel the Akufo-Addo administration to abolish some taxes he described as “obnoxious and insensitive.”

He presented a litany of concerns, not excluding the controversial E-levy.

“We demand an immediate withdrawal of the E-levy." Mr. Monah has indicated.

According to him the e-levy was one of the reasons why the youth across the country are poor.

The leadership of parliament represented by the Majority leader, Mr. Kyei Mensah-Bonsu, and the Minority leader, Mr. Haruna Iddrisu, received the petition on behalf of the Speaker of Parliament, Mr. Sumani Alban Bagbin.

Mr. Kyei Mensah-Bonsu assured the pressure group that parliament would work within its powers to address the issues raised.

“We have a right to demonstrate nonetheless, let us keep it peaceful so that no one takes advantage to destabilize the country. The stability and viability of the nation should be the overall objective.” Mr. Osei Kyei Mensa Bonsu has said.

According to him, parliament consists of representatives of the people, so whatever affects the ordinary Ghanaian concerns parliament; therefore, parliament would study the petition and see how best it can help address the issues raised.