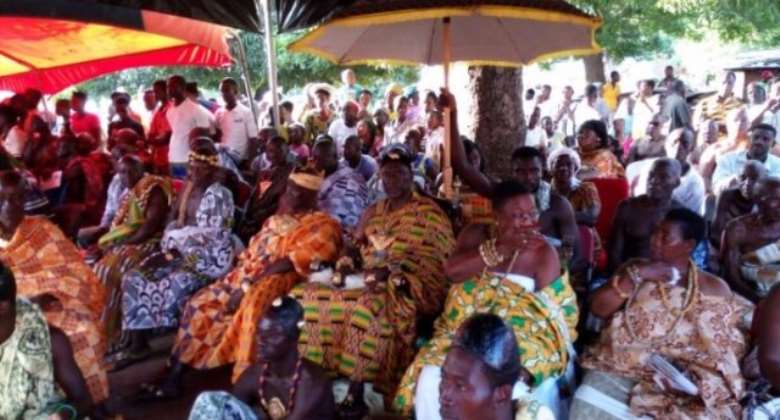 More than 59 years since the Volta region was added to Ghana, leading chiefs in the region want the region divided.

The Volta region is made up of Ewes who cover the southern half of the region and an amalgam of Guans, Buems and Akans, in the Northern half.

Forming a Joint Consultative Committee, the chiefs and opinion leaders have a representative presenting arguments to the Commission of Enquiry tasked to create new regions.

The chiefs want the carved out area to be called the Oti region and have tasked Secretary of the Joint Consultative Committee Kweku Addeah to make their case as convincingly as possible.

At a closed door meeting at the Osu Castle, journalists would not be able to assess how convincing the arguments were as the encounter was in-camera.

But laughter could occasionally ripple through the conference room where the petitioners faced Justice Stephen Brobbey and eight others who form the Commission of Enquiry.

Emerging hours later, the Secretary of the Joint Consultative Committee Kweku Addeah fed the media with a heavily summarized version of his arguments.

He said the neglect the Oti area suffers is shocking vis-a-vis the natural resource contribution to the country.

He said Ghana's cashcow -cocoa beans - hauled out of the region is not commensurate with the development projects undertaken in the area. There is also coffee and cola to make the region three-pronged cash crop contribution complete.

The measure of their neglect, he said, is seen in how the Oti area can hardly boast of any major political appointment of residents from the area.

Kweku Addeah believes the neglect is enough and development can come faster if the Oti region is created.

There would be a regional minister and a whole government bureaucracy and a good budgetary allocations moved in there to trigger development projects, businesses and other construction works.

The topography of the Volta region is even making a case for the split because the Oti river divides the region into the haves in the South where the regional capital Ho is located and the haves-not in the Northern area.

To conduct any critical official business with the government, people have to contend with crossing the Oti river to get to the capital, Ho.

In essence, the people from the North and South of the Volta region have not really felt the regional cohesion envisioned by the creators of the region.

If the 30-year old struggle to divide the Volta region gets the nod, the chiefs want the new Oti region to include the Jasikan district, Biakoye district, Kadjebi district, Nkwanta North and south and Krachie East, West and Ntsumuru districts.

Also included are Santrokofi, Akpafu, Likpe and Lolobi traditional areas all in the Hohoe municipality.

The Commission will submit their report to the president and a referendum is expected to be held to finalise the creation. If the referendum happens, it will be the second in the Volta region after the 1956 Plebiscite effectively added the Trans-Volta Togoland controlled by the British to Ghana.