Codeo Preliminary Findings On Observation Of The December 27, 2018 Referendum 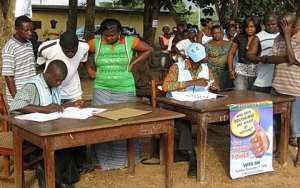 On Thursday, December 27, 2018, the Coalition of Domestic Election Observers (CODEO) deployed fifty (50) observers to various districts and constituencies in selected regions within which the referendum on the proposed creation of additional regions was taking place. CODEO observers visited an average of four (4) polling stations within their assigned districts in the course of the polling exercise. Observers spent between an hour and two hours at each polling station visited. Overall, the referendum took place in a calm and peaceful electoral environment. However, a number of electoral anomalies were recorded by CODEO Observers during the observation exercise. These anomalies raise serious questions about the integrity and credibility of the polling process in the observed polling stations.


Below are key findings from CODEO's observation:

Below are some of the polling stations where such high turn-out figures were observed at the end of voting:

Below are some examples of polling stations where such high numbers of manual verification were observed:

At other polling stations, however, the percentage of voters manually-verified ranged from as low as 0% to 5%.

OSP not enough to win the fight against corruption — Micheal...
49 minutes ago