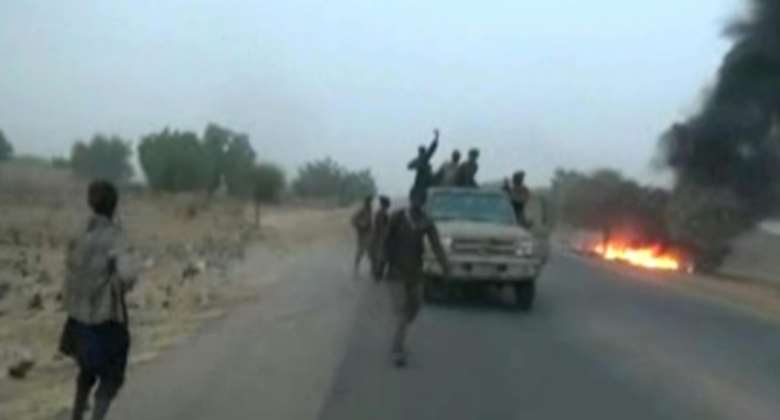 At least 20,000 people have been killed and more than 2.6 million people made homeless in northeast Nigeria since the Boko Haram launched an insurgency in 2009. By FLORIAN PLAUCHEUR (AFP/File)

At least two civilians were killed when dozens of Boko Haram fighters tried to storm a town in a remote area of northeast Nigeria but were repelled by troops, locals said on Tuesday.

The attempted raid on Gulak, in the Madagali area of the far north of Adamawa state, happened at about 7:30 pm (1830 GMT) on Monday and involved about 50 jihadists.

"There was a gunfight that lasted for almost half an hour," said Maina Ularamu, a former chairman of the Madagali local government area.

"One of the (Boko Haram) pick-up trucks, which was laden with explosives, tried to get past the military checkpoint. Soldiers opened fire on it and it exploded.

"That caused a lot of casualties on the part of Boko Haram. One soldier was killed and two other women nearby also died from stray bullets."

There was no immediate confirmation of the deaths from the Nigerian Army when contacted by AFP.

Another resident who gave only first name, David, said locals fled into the bush because of fears the Islamist militants would overrun the checkpoint.

"We came back hours after the fighting stopped when we were sure the attack had been repelled," he added.

At least 20,000 people have been killed and more than 2.6 million people made homeless in northeast Nigeria since the Boko Haram launched an insurgency in 2009.

But despite repeated claims that the rebels are on the verge of defeat, there are regular attacks.

Monday's assault is the latest in the Madagali area, which lies on the border with Borno state and near where Boko Haram had camps in the Sambisa Forest former national park.

Last week, two female suicide bombers died in Dar village near Gulak but there were no other casualties. Locals said they believed they may have been trying to target a church.

Nigeria's military said late last year it had forced Boko Haram out of its camps in the Sambisa Forest but there have been reports the insurgents have moved back in.

They are also known to be hiding in the Mandara mountains to the east of Madagali, which form the border with Cameroon.

Suicide bombing is a constant threat to civilians. On Tuesday, up to eight people were injured when four female bombers tried to get into the Borno state capital, Maiduguri.

One detonated her explosives in a crowd on the outskirts of the city near Kaleri village. Two others blew up on farmland while a third was shot, civilian militia and police said.